When layoffs lead to nasty politics

Tough economic times may bring out the sharp elbows in co-workers, but should you join in the maneuvering or keep your distance? 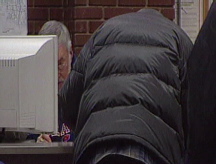 How Obama should fix the economy
Real people across the country answer the question: How will Obama affect your wallet? And what do you think the new President and Congress needs to do to right the economy - both in the short run and the long term?
View photos

NEW YORK (Fortune) -- Dear Annie: I work in an office with about 40 peers (and 2 bosses), and rumors are rife that about 10 or 12 of us are going to get laid off as part of the latest cost-cutting drive. The situation has really brought out the worst in some of my colleagues, who are kissing up to the bosses, spreading damaging gossip about certain people, and generally acting in ways that are, in my opinion, highly unprofessional. Should I just ignore all this, or would it be smart to point out to higher-ups (discreetly) that there is a lot of self-serving behavior going on here? -Avoiding the Water Cooler

Dear AWC: If your bosses aren't already aware of your colleagues' Machiavellian maneuvers - and I bet they are - then telling them what's going on is just going to look self-serving on your part (and, let's be frank here, rightly so). No surprise: A recent survey of 522 office workers found that more than half (53%) say underhanded behavior has increased at work lately.

"In times of uncertainty and rising unemployment, some people feel insecure, which leads them to start trying to curry favor with decision-makers any way they can," says Jon Zion, president of eastern U.S. operations for staffing firm Accountemps, which hired an independent research firm to conduct the survey a couple of months ago. "It's a mistaken strategy because, in general, office politics just drains productivity and damages morale. You're far better off staying focused on your job. In the end we're all measured on results."

A cynic would say that's not always entirely true but, on the other hand, we've all known people who have aimed to undermine a colleague and ended up shooting themselves in the foot. Still, only 29% of those surveyed said that it's best to steer clear of office politics completely. A majority, 54%, opined that the smart course is to be aware of what's going on without getting directly involved. The other 16% said that "it's best to participate [in political maneuvering] so you can get ahead."

Zion and his colleagues divide that small group into five distinct types. See if any of these sound familiar:

1. The Pundit. "This is the person who sits around at lunch, or hangs around the water cooler, endlessly speculating about 'what's really going on' and seeming to have inside information," observes Zion. "Every once in a while, usually just by coincidence, these people turn out to be right." Tempting as it may be to listen - "after all, knowledge is power," he notes - the worst thing you can do is give the Pundit any information about anything: "You never know how it will get twisted."

2. The Lobbyist. A vocal advocate of his or her projects, and often skilled at getting other people to go along, the Lobbyist "may be unreceptive to outside points of view," Zion says. "It's okay to support this person's agenda, but you need to be careful not to get run over. Make sure your own point of view gets heard."

3. The Covert Operator. "These are not hard to spot," says Zion. "They're the people trying to use manipulation rather than excellent work to get ahead - and they can be very charming, so keep your guard up." You might even show the Covert Operator that you're on to him, by politely objecting when he puts down a colleague or takes credit for someone else's work.

4. The Activist. Enthusiasm is contagious, so you may find yourself getting swept up in this person's cause. "An Activist can be a very persuasive and aggressive advocate for what he or she believes is the right thing to do," Zion says. But watch out: "You don't necessarily want to be identified with a cause that doesn't benefit your employer's big-picture goals," says Zion. "You're at work to do a job, not to get caught up in extraneous stuff that, 9 times out of 10, isn't going to benefit you."

5. The Advisor. "This is an interesting type," says Zion, "because this person is often closely aligned with a company's top leadership and serves as senior managers' eyes and ears." Advisors don't always rank high in the official pecking order: "The Advisor could be anybody - a senior aide or an administrative assistant." Don't kiss up, but don't alienate this person, either: "Advisors wield considerable behind-the-scenes influence, so a decent rapport with them could ultimately work in your favor."

If there's any job security at all these days, Zion says, it depends not on sneaky tactics but on being really great at your actual job.

"The important thing is to concentrate on your performance, demonstrate to your bosses why you are indispensable, and not get embroiled in office politics," he says. Easier said than done, but look at it this way: If you stand out as a star performer, then even if you do get laid off, at least you'll have terrific references for your job hunt.

Readers, what do you say? Have office politics gotten nastier at your shop lately? What type of behavior bothers you the most or seems to cause the most trouble? Any tips for handling office politics? Post your thoughts on the Ask Annie blog.