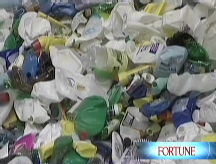 10 most 'accountable' big companies
Fortune partnered with AccountAbility, Csrnetwork and Asset4 to rank the world's 100 largest corporations by the quality of their commitment to social and environmental goals. Here's what makes the top 10 stand out.
View photos
'Greenest house in America'

(Fortune) -- Some environmentalists attack bottled water. Not Conservation International, a Virginia-based nonprofit that aims to protect the earth's biodiversity.

"We applaud Fiji Water for offsetting the climate impact of its products, reducing the impact of its operations, and funding crucial conservation efforts that support local communities and protect some of the last remaining forests in the South Pacific," he said in a Fiji Water press release.

Such cozy arrangements are increasingly common as big companies work side-by-side with big NGOs (non-government organizations). Clorox secured the endorsement of the Sierra Club - and the use of its logo -- for a line of eco-friendly cleaning products, called GreenWorks that the company introduced late last year. Neither will disclose how much cash is involved.

When Coca-Cola (KO, Fortune 500) last month set new targets for greenhouse gas reductions, the World Wildlife Fund offered its praise - again not unexpectedly, since the beverage giant consulted with WWF on its climate change plan and agreed to donate nearly $24 million to the environmental group to help preserve river basins.

All this is a dramatic turnabout from the time, not all that long ago, when big business and the environmental movement were frequently at loggerheads. Now they often share common goals, and those on both sides of these partnerships say it makes sense for companies to pay groups like Conservation International and World Wildlife Fund for their expert help.

"Judge us on what we and the companies together are able to do for the environment," says Glenn Prickett, a senior vice president at Conservational International.

By that standard, they're doing good - Conservation International has worked with Wal-Mart (WMT, Fortune 500) on an array of projects, including the retail giant's efforts to promote more responsible mining of gold and silver, and CI has secured commitments from the likes of Starbucks, (SBUX, Fortune 500) Dell (DELL, Fortune 500) and Marriott (MAR, Fortune 500) to preserve tropical forests.

Recently, for example, Starbucks made a $7.5 million multi-year commitment to Conservation International, which works with the company's coffee buyers and farmers to develop standards that reward growers who adopt environmentally-friendly methods. Starbucks benefits because more sustainable growing practices help insure a long-term supply of coffee.

"This renewed partnership will help us create the mechanisms to support farmers who are preserving forests and working with us to be part of the climate solution," says Ben Packard, director of environmental affairs for Starbucks.

Critics, though, see something unseemly about these deals. Nonprofit groups taking cash from big companies are unlikely to push their donors very hard, they say.

I asked Corporate Accountability International, an activist group that opposes bottled water, about Conservation International's work with Fiji. Patti Lynn, the group's campaign director, replied: "Partnerships between environmental organizations and corporations like Fiji Water often provide positive PR, and can distract from the genuine concerns that people are raising about the practices of the bottled water industry."

Activist groups like Greenpeace and Rainforest Action Network generally don't take corporate money. Neither do more mainstream organizations such as the Natural Resources Defense Council and the Environmental Defense Fund, which often work with big companies. "We at NRDC can't run the risk of letting money cloud our judgment.," says spokeswoman Julia Bovey.

"The idea is not just to change a single company's products or services but to create a new standard that transforms an industry," she says. On its Web site, Environmental Defense posts a corporate donation policy that says, among other things: "Ours is advice and advocacy that money can't buy."

Jeff Hollender, the CEO of a company called Seventh Generation, raised questions about the Clorox-Sierra Club partnership at a conference sponsored by Business for Social Responsibility, a nonprofit association. Hollender's Vermont-based firm pioneered the field of non-toxic cleaning products (and competes with Clorox (CLX, Fortune 500)). He's also on the board of Greenpeace, which works closely with companies like Coca-Cola and Unilever around cleaner refrigerants but won't take their donations.

"If you look at how much of some NGO's budgets come from business, I think it's too much," Hollender says. What's more, he says: "No one will say how much money the Sierra Club is getting from Clorox. If you are going to do it, you have to have complete transparency."

A Sierra Club spokesman, David Willett, confirmed that the organization has not yet disclosed financial details of the deal with Clorox but that it might do so in the future. The Sierra Club got a lot of pushback with the arrangement was announced, and explains itself on its Web site. "The Green Works line will make it easier and more affordable for Americans to buy eco-friendly products," stated Carl Pope, the Sierra Club's Executive Director.

WWF took in about $7 million in corporate grants, about 4.3% of its $161 million in revenues last year. Its partner-donors include Coca-Cola, Hewlett-Packard (HPQ, Fortune 500) and Johnson & Johnson (JNJ, Fortune 500). WWF says it won't take money from alcohol, tobacco and firearms firms, and tries to avoid those that engage in animal testing and nuclear power.

"We raise money to support all of our work, and corporations are a source," says Suzanne Apple, WWF's vice president and managing director for business and industry. "I don't find it compromises us. In fact, in some cases, because of relationships we've built, we're able to push companies harder."

Besides, as Prickett of Conservation International says, some companies respond better to praise than they do to criticism, just as some nonprofits do better at partnership and others specialize in activism. "For every Conservation International that's about collaboration and partnership, you need a Greenpeace that's about agitating and challenging business," he says.

But should green groups really praise bottled water? "When Fiji Water came along and said they had a business interest in protecting their watershed, that was an opportunity for us," he says. "That nation is going to find something to ship out of Fiji. It could be logs or an industrial product. We'd much rather see it be a clean product that is produced with renewable energy."

Disclosure: Conservation International, Environmental Defense Fund and the Natural Resources Defense Council are all programming partners with Fortune's annual Brainstorm Green conference about business and the environment. Marc Gunther's wife is a senior manager at Greenpeace.