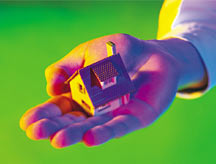 NEW YORK (CNNMoney.com) -- National home prices, driven lower by a flood of foreclosures, plummeted in the third quarter by a record 9% year-over-year, according to a report issued Tuesday.

The median price of a single-family home fell in four out of five states, the National Association of Realtors reported. The national median price was $200,500, down 2.9% from the second quarter of 2008.

A flood of foreclosures has driven home prices down. As many as 40% of all sales made during the three months that ended Sept. 30 were short sales pr properties repossessed by banks. These are eager sellers. The longer the banks hold the vacant homes, the more it costs them in maintenance, taxes and insurance.

"A very large proportion of distressed home sales are taking place at discounted prices compared to more normal conditions a year ago," said NAR President Charles McMillan, a Dallas real estate broker. "It's very challenging to understand proper valuation, given the differences between distressed sales and a larger share of traditional homes in sound condition."

The high volume of sales in California and other bubble-bust states may indicate a healthy trend, according to Lawrence Yun, NAR's chief economist.

"We have seen cases of multiple bidders on properties in California," he said. "That suggests that future price declines may be minimal."

But while California saw significant declines, fully 79% of all metro areas recorded price drops for the quarter, according to Mike Larson, a real estate analyst at Weiss Research.

"We're clearly seeing a broadening, as well as a deepening of the declines," Larson said. "That indicates we've moved past the time when price drops were fed by bursting of real estate bubbles to one in which the broad economic downturn, marked by job losses, is taking hold."

And it may get worse, according to real estate analyst Patrick Newport of Global Insight. Financial market turmoil and soaring unemployment rates worsened in October and were not captured in this report.

"It is too soon to tell, but we may be getting some ugly sales numbers over the next three months," he wrote in an email.

Larson said that one source of strength in these markets was commodities. Grain prices have soared, peaking at close to $8 a bushel in early summer, more than twice the average levels of the past several years. The stronger grain prices helped prop up the economies of some Midwestern cities.

The lowest-priced housing market in the country was Saginaw, Mich., where the median price of a single-family home is a mere $65,800, down 22.5% year-over-year. Real estate there has been hit hard by turmoil in the automotive industry.

The highest-priced market was the San Jose metro area, where the median home price was still $650,000 despite having plunged 23.5% during the past 12 months

First Published: November 18, 2008: 10:16 AM ET
NAR 3rd quarter 2008 home prices
Note1: California prices provided by the California Association of REALTORS® *All areas are metropolitan statistical areas (MSA) as defined by the US Office of Management and Budget as of 2004.
They include the named central city and surrounding areas. N/A Not Available p Preliminary r Revised
© 2008 National Association of REALTORS®

Who benefits from the new Fannie-Freddie plan?

85,000 homes lost in October
Find mortgage rates in your area