Cisco Systems layers it on 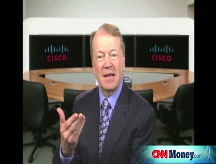 (Fortune Magazine) -- Manny Rivelo, a senior vice president at Cisco Systems, belongs to more internal company teams than he can count on both hands. "I'm on a litany of them - three councils, maybe six boards, and five working groups," he says.

They're part of an organizational web dreamed up by CEO John Chambers - a structure so complex that it takes 15 minutes and a whiteboard to fully explain. Chambers, however, uses just three words to describe the benefits of the San Jose networking giant's management system: "speed, skill, and flexibility."

It seems paradoxical that a multilayered organizational model would actually speed things up. But Chambers, whose company landed on the World's Most Admired Companies list partly for its management prowess, says his system of boards and councils has indeed made Cisco (CSCO, Fortune 500) more agile - and that it will help the company grow in the recession.

Chambers' idea originated at the tail end of the 2001 downturn, after Cisco wrote off $2.2 billion in losses. He realized that the company's hierarchical structure precluded it from moving quickly into new markets, so he began to group executives into cross-functional teams. Chambers figured that putting together managers in sales and leaders in engineering, say, would break down traditional silos and lead to faster decision-making.

Not all Cisco executives felt the same way. "It took seven years, and the first three years were bumpy," says Rivelo. Chambers has said that as many as 20% of Cisco's executives couldn't handle working with unfamiliar colleagues; some were irked by the new compensation structure, which is tied to teamwork.

Rivelo is part of a nine-person council that the company created to replace its chief development officer, who departed in December 2007. Some 70% of Rivelo's compensation is based on the council's ability to meet revenue targets and collaborate.

As Cisco has entered new lines of business (the router company now makes thousands of products, including high-end teleconferencing systems and cable boxes), its teams and councils have multiplied. Today there are at least ten boards and more than 30 councils, says Rivelo, who admits that he doesn't know the exact number.

The total is hard to pin down because it's constantly evolving. Padmasree Warrior, Cisco's new chief technology officer, belongs to the enterprise council - teams at that level target $10-billion-plus market opportunities. She recently saw a chance to deliver services over the Internet and formed a smaller working group to research the idea. Four months later that group evolved into a board, which is a subset of a council.

Although the system has been in place for years, its success is difficult to quantify. Cisco says the team approach helped it figure out in only eight days that it should acquire Web-conferencing company WebEx, for example. But Yankee Group analyst Zeus Kerravala says he's still waiting for a productivity metric. "Nothing will show success more than proof," he says.

Technology chief Warrior says that she was skeptical when she first came to Cisco in March from Motorola (MOT, Fortune 500). But she became a believer when she and others from different divisions forged a partnership with an outside company in a single council meeting. What would have required multiple meetings at other firms "took the four of us on a phone call," she says.

Such quick decision-making could help Cisco execute some key acquisitions in the current slowdown. For many big companies, belt-tightening usually means putting off big decisions until conditions improve. Cisco, with $26 billion in cash, has the coffers - and apparently the management structure - to immediately start shopping.