CBS will add 150 digital stations to Yahoo's programming and take over its radio ad sales. 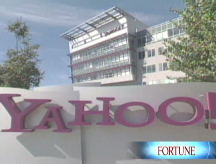 NEW YORK (Fortune) -- Yahoo Music fans are used to turning on its radio service to hear rock bands like Fall Out Boy and My Chemical Romance. Those who bother to do so, anyway - as of October the company's LAUNCHcast radio site had lost 43% of its monthly listeners compared to the same month last year, according to comScore.

But help is on the way. Yahoo (YHOO, Fortune 500) is announcing Wednesday that it is adding CBS's nearly 150 digital radio stations - offering a mix of music, news, sports and talk - to its own 150 stations, which only program music.

That means you can still hear Fall Out Boy on Yahoo digital airwaves. But you will also get an earful of some heated arguments about what Plaxico Burress' recent gunshot wound means to the New York Giants from the hosts of CBS's WFAN.

These changes will begin early next year. (CBS will continue to operate its own digital radio stations outside of Yahoo.)

It's no surprise that CBS would want to join forces with Yahoo, one of the Internet's largest digital media players. CBS (CBS, Fortune 500), after all, is known primarily for its terrestrial radio offerings and needs to show investors that it can be a force on the Internet, too.

The deal also makes sense for Yahoo. As recently as October 2007, Yahoo's LAUNCHcast had 5 million monthly users, according to comScore. A year later, it had 2.8 million. By contrast, CBS Radio's online audience grew by 4% to 3.9 million digital radio listeners.

CBS may also be better positioned than Yahoo to deal with the tough realities of the digital radio business. Yahoo has been hit with two music-related court decisions that threaten to curtail its ability to make money on Internet radio.

Last year, a panel of federal copyright judges issued a ruling dramatically increasing the royalties paid by webcasters to music companies and songwriters. Yahoo, AOL, Pandora and RealNetworks (RNWK) are fighting to reverse it. But unless they can get support from Congress, digital radio providers may be forced to pay annual royalty hikes of nearly 30%.

Another federal court issued a preliminary decision requiring Yahoo to pay a hefty chunk of its revenues to the American Society of Composers, Authors and Publishers for its use of steaming radio and video.

"There have been a lot of changes in the economics of digital radio in the last year," Yahoo Music chief Michael Spiegelman lamented.

David Goodman, president of digital media for CBS Radio, said his company was still willing to go into business with Yahoo because these court decisions would have far less impact on his company. That's because CBS programs so much news and talk radio. "We don't have the same royalty issues with talk radio," he said.

Goodman also said CBS has "thousand of people who understand how to sell audio" advertising who will now be pushing Yahoo's inventory to Madison Avenue.

In short, CBS gets a bigger footprint on the Web. And Yahoo will probably do better because it's effectively outsourcing its radio ads sales to a company with a great deal of experience in the field.

The partnership is also consistent with Yahoo's strategy to shift its music business from providing content to creating community.

This year, Yahoo has closed its music download service, never a strong competitor to iTunes. It also outsourced its music subscription service to Rhapsody.

At the same time, Spiegelman is overseeing a redesign of Yahoo Music so it can offer more artist information, blogs and playlists. He hopes to weave CBS's LastFM.com on-demand music service into this mix as well.

"Radio is where we got our start," Spiegelman said. "It's where we built our initial traffic. But as we've broadened our offerings into other things like video content and lyrics on demand, it doesn't have the same importance that it did five or six years ago. It's still key to us. But it's not the fundamentally central product to us that it used to be."