The technology outlook for the new year looks pretty grim, but here are a few trends that could pay off. 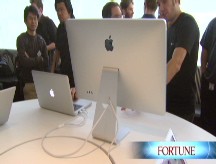 NEW YORK (Fortune) -- You can't really blame technology executives and pundits for not wanting to go too far out on a limb in making prognostications and predictions about 2009.

The world tech companies will operate in will be pretty awful, but no one knows just how bad things will get: The global nature of the recession - and the dollars, euros and yuan governments are pumping into their local markets - simply is without precedent.

And it isn't like Internet or even computing companies have a lot of experience with these sort of things: Economists argue that the world hasn't seen a financial crisis this severe since the Great Depression, and back then, the only "tech" companies were making tabulating machines or selling phone lines.

Of course, every company that hopes to survive the current meltdown has to make some forecasts about the future.

We've asked various tech veterans to tell us what to expect in 2009. Not surprisingly, almost everyone believes big-ticket luxury items will suffer, especially in the consumer electronics space. The exception will be so-called "smartphones," those high-end wireless devices such as Apple's (AAPL, Fortune 500) iPhone and RIM's (RIMM) line of Blackberry products.

Many consumers in 2009 will upgrade from plain-old cell phones to gadgets that do e-mail and offer Web access, and they'll increasingly buy special services or software especially designed for the mobile Web (think of the cool games and applications available on the iPhone App Store).

Beyond smartphones, the big sellers in tech will be products and services that help companies and consumers save money or work more efficiently. "Short term," said Shane Robison, chief strategy and technology officer of Hewlett-Packard. "Everybody is focused on how do I get the most bang for my buck."

With businesses and consumers adopting more cheapskate ways, here are four tech trends to count on in the new year.

The computer industry now ships more portable computers such as laptops than desktops, and an increasingly important part of the mix will be mini-notebook computers, known as netbooks. Industry sources say computer makers will sell more than 11 million netbooks worldwide in 2008, up from just around a million in 2007, and netbook sales could easily double in the new year.

The appeal of these stripped-down portables (no DVD drive, a lot less processing power) clearly is their equally stripped-down price. Market leaders ASUS and Acer, both based in Taiwan, offer sub-$300 netbooks, and U.S. manufacturers Dell (DELL, Fortune 500) and HP (HPQ, Fortune 500) have netbook offerings of their own.

The affordability of netbooks makes them an ideal solution in emerging markets, but analysts think the minis will also appeal to cost-conscious consumers in the United States.

Netbooks "are something to watch in a downturn," said Phil Asmundson, national managing partner of Deloitte's technology, media and telecom practice. "A lot of functionality of a computer goes unused, and netbooks are a good alternative."

Hey, you, get onto my cloud

Evangelists such as Salesforce.com (CRM) CEO Marc Benioff have been predicting for years a revolution in so-called cloud services and computing, in which software and other applications are delivered to end-users over networks, or "the cloud." This may be the year Benioff and the cloud crowd are proven right.

Corporate cloud computing is getting a big boost from consumers who already get a fair number of services via the Net. Photo-sharing sites are great examples of cloud services, as is just about any service that lets consumers store data or information anywhere but their computer or mobile phone. "In the consumer space it isn't hype," said HP's Robison. "It's actually quite far along."

Remember how consumers' adoption of Wi-Fi forced companies to figure out ways to let workers connect to their corporate networks wirelessly? Workers who use lots of cloud services in their personal lives, too, are going to start wondering why software and other applications have to be tied to a specific device, or housed on a database at the company.

The terrible economy will also help. Software-as-a-service companies have long promoted themselves as more capital-efficient alternatives to installed software solutions. Instead of financing a big software purchase and installation, companies can "pay as they go" under the cloud services model.

"The capital crunch of 2009 will put a spotlight on the advantages of cloud computing: less risk, no capital expenditure, predictable operating expenses and fast results," predicted Salesforce's Benioff. "I believe that will translate into greater adoption for both cloud computing applications and platforms."

Like cloud computing, "virtualization" helps companies reduce the cost of operating machines such as servers. The technology basically allows a single piece of hardware to run systems or applications that previously had run on multiple machines - essentially allowing companies to squeeze more out of existing hardware and even defer new purchases.

Virtualization has only been around in earnest for about three years, says Dell senior vice president Paul Bell, but he thinks corporate customers are starting to embrace it. (Dell is in the process of virtualizing 9,000 of its own corporate servers, an undertaking that Bell estimates is one of the 10 largest virtualization projects going right now.)

Virtualization also benefits from corporations' efforts to be more environmentally friendly. Neither companies nor environmentalists are thrilled with the energy consumed by server farms, those sometimes sprawling data centers that house thousands of humming computers. By reducing the need to additional servers, corporations save money and gain some "green" cred, too.

Yes, the economy is terrible and money is tight, but consumers will spend in 2009 on a few fun games and gadgets, says Kumu Puri, a senior executive with Accenture's electronics and high-tech practice. New gaming systems such as Nintendo's Wii have invigorated the console space, but Puri thinks handheld gaming systems like Nintendo's DS will also do well in the new year.

And no matter how bad things get out there, American consumers are unlikely to part with their broadband connections, an Accenture study found. Indeed, they are more likely to get rid of cable television channels (once considered practically a utility) or their mobile phones than their high-speed Internet connections. "It is absolutely recession-proof," she said.