Americans back auto bailout - for now

CNN poll shows Americans supported the automaker bailout but would rather the companies enter bankruptcy than get any additional government aid. 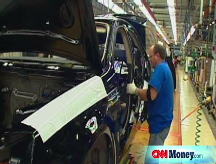 NEW YORK (CNNMoney.com) -- A majority of Americans favor the Bush administration's decision to bail out the U.S. auto industry, but they draw the line at $13.4 billion.

According to a recent CNN/Opinion Research poll, 63% of Americans said they supported the government's automaker bailout unveiled Friday. But if the companies ask the government for any more money, 70% said Washington should let the companies enter bankruptcy rather than give them any additional assistance.

Despite the lack of public support, the automakers are likely to get more federal bailout money anyway. The government has promised $4 billion more once Congress releases the remaining balance of rescue funds to the Treasury Department.

That brings the total bailout of GM (GM, Fortune 500) and Chrysler to about $17.4 billion -- just more than half of the $34 billion the automakers had requested from Congress earlier in December.

With auto sales continuing to plummet, analysts expect the automakers to ask for more once the new Congress and Obama administration take over in January. And the finance arms of the Big Three are expected to seek bailout money set aside for banks and other financial institutions as well.

"With the current credit situation, it has been very hard getting debtor protection financing, so any automaker bankruptcy would have to be assisted by the government," said David Weiss, chief economist at Standard and Poor's. "If one of them enters Chapter 11, they would still need government funding to avoid failing."

Some analysts estimate that the cost of an auto bailout will eventually run as high as $125 billion.

Bankruptcy, no matter the cost

But Americans would rather see the companies go bankrupt than get more federal funding - even it it means the economy will suffer as a result.

According to the survey of more than 1,000 Americans conducted Dec. 19-21, 94% think a bankruptcy of one or more of the U.S. automakers would cause problems for the economy. Fifty-one percent think those problems would be major, and 15% said it would cause an economic crisis.

Fewer said they would personally suffer as a result of an automaker bankruptcy; 52% said it would cause problems for their personal financial situation.

But experts disagree, saying an auto bankruptcy could result in widespread job losses across the industry.

"If they don't sell cars, they can't hire any people," said Weiss. "Many would lose their jobs, and there are serious implications for retirees."

Neiger said the pain would be even more widespread.

"A lot of people would be hurt by an auto bankruptcy," he said. "There are many people who don't work for car companies but nevertheless derive their livelihood from the auto industry."

President-elect Barack Obama supported the bailout, saying a bankruptcy "would have devastating consequences for our economy and our workers."

Executives at Detroit's top automakers have said that a bankruptcy would likely lead to widespread failure of auto parts companies and harm the economy. The automakers have issued more than $70 billion in bonds that might default if they enter bankruptcy protection.

Auto executives have also said consumers will not buy cars from a bankrupt automaker. Americans seem to agree, with 65% saying they wouldn't likely buy a car from an auto company that has entered bankruptcy.