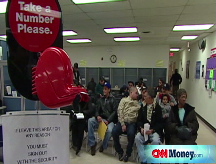 NEW YORK (CNNMoney.com) -- As the recession has worsened, companies have ratcheted up drastic cost-cutting measures and layoffs. And 2009 doesn't look much better, according to two recent reports.

In a report released Monday, executive outplacement firm Challenger, Gray & Christmas Inc. predicted that more than 1 million jobs would be cut in 2009.

The report also said that 39% had already cut their work force - up from 19% in October.

"Companies are trying a multitude of actions to help trim costs," said Laurie Bienstock, national director of strategic rewards. "There's been a huge shift in the economy, and the numbers will probably be in flux until things settle down."

Included in that "multitude" are reductions for those spared in layoffs. In Watson Wyatt's October survey, 4% of companies said they had already implemented a salary freeze. By December, that number soared to 13%.

A further 19% said they planned freezes in the next 12 months, up from 12% in October, according to the latest report, which was released Thursday.

One in five companies has raised employee contributions to health care, and 17% planned to do so over the next year. Completed salary reductions jumped to 5%, up from 2% in October.

"Companies are taking five or six different actions to find the combination that's most effective for them," Bienstock said.

Merit raise budgets - cash that companies set aside for bonuses and rewards - changed the most dramatically, Bienstock said.

"Companies are struggling with the attraction and retention of talent," Bienstock said. "At least in the short-term, a lot of people with critical skills are not in the job pool. They're staying put, and it's hard to draw them out."

Bienstock said more corporations are piecing together contingency plans and trying myriad options, so the recent flurry of activity may lead to a plateau in these numbers over the next few months.

"No one can make statements about what will happen in the economy, but over the next three months companies will start to see the impact of these changes," Bienstock said.

How bad (really) is 8% unemployment?

Preparing for a layoff