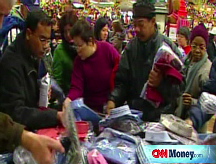 NEW YORK (CNNMoney.com) -- In the latest sign of consumers in distress, online holiday sales registered a first-ever decline in seven years, according to sales tracker ComScore.

The firm said online spending for the first 49 days of the critical November-December gift-buying period fell 1% to $24.03 billion compared to $24.15 billion over the same period last year.

Andrew Lipsman, analyst with ComScore, said this is the first time the firm has recorded a drop in the measure since it started tracking holiday ecommerce sales in 2001.

Talk Back: Has the economy affected your holiday shopping?

This, in turn, has put the 2008 holiday shopping season in serious peril, which could be catastrophic for many merchants since the November and December shopping months can account for as much as 50% of their annual profits and sales.

The spending slump has already left several casualties in its wake: Many national chain stores, including Circuit City and Linens 'N Things, have already either declared bankruptcy or are going out of business.

And if sales continue to decelerate in 2009, it could further shrink the retailing industry and eventually derail the economy since overall consumer spending also fuels two-thirds of the nation's economic activity.

For its part, the National Retail Federation (NRF), the industry's largest trade group, estimates that total holiday sales will grow 2.2% this year, which would be the weakest gain in six years.

But several other retail experts expect a worse performance - and are even forecasting first-ever declines in overall retail sales.

ShopperTrak, which closely monitors sales and traffic trends in more than 50,000 retail locations nationwide, is expected to release sales numbers Tuesday for this past weekend, which typically is the year's busiest shopping weekend for merchants.

However, anecdotal information from retail analysts and mall operators indicates that retailers had a difficult time getting shoppers to splurge in the final stretch to Christmas.

"Overall, it appears that Saturday experienced strong traffic while sales varied from up to flat to down," emailed Karen MacDonald, spokeswoman for Taubman Centers, which owns or manages 24 shopping centers in 11 states. In her e-mail to CNNMoney.com, she also noted that holiday gift card purchases were "consistently down" through the season.

"Parking lots were full in many of the malls we visited, but as told by mall management, the cars were deceiving with respect to sales levels," Amy Wilcox Noblin, analyst with Pali Research, wrote in an e-mail Tuesday.

Wintry conditions across the northern states also hurt traffic and resulted in store closures. Specialty retailers, including Bebe, Gap Inc. (GPS, Fortune 500) and Urban Outfitters (URBN), were especially hard-hit because of the weather, Noblin said, since these chain stores have a larger number of locations in the Northeast.

"The weather could not have come at a worse time with retailers already suffering a dismal December and looking to make a big push in the final weekend before Christmas," she added.

Marshal Cohen, chief retail analyst with NPD Group, said his own weekend spot checks indicated that traffic was on par with last year's levels. "But it was also very evident that purchases were down, both in dollar transactions and the number of bags people were carrying," he said.

Cohen said the real danger for retailers in 2009 is American households changing psyche.

He cited results of an NPD survey conducted earlier in December that polled 65,000 consumers. Of that total, 31% said they were concerned about their job security and had cut back on their spending.

More importantly, Cohen said he's worried about the 69% of respondents who said they weren't that concerned about losing their jobs but were still spending less in stores.

More people are starting to think that it's the right thing to do to shop less in this environment," he said.