Treasurys trade narrowly higher as the dollar is mostly unchanged in a day devoid of economic indicators. 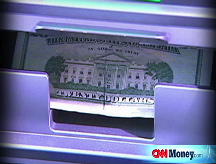 NEW YORK (CNNMoney.com) -- With few investors trading and fewer indicators to base trades on, the dollar and government bonds held tight Friday.

Treasurys resumed trade Friday after the market was closed Thursday for the Christmas holiday. Some bond market participants took an extended break, and many foreign investors are off for Boxing Day.

Despite a record auction of $120 billion in bonds earlier in the week, the huge increase in Treasury supply has done little to move bond prices significantly lower or yields higher off their all-time lows.

Private investor and corporate demand for government bonds remains high, as the stock and commodities markets continue the volatility that has persisted throughout the year and especially in the past three months. Looking for a safe alternative, investors have opted to buy up Treasurys with the hope that government bonds will provide a secure investment - if yields are low.

As a result, Treasury bonds have been one of the best performing assets this year, returning 14.3% to investors, according to a Lehman Brothers index. Investors holding S&P 500-based index funds, on the other hand, have lost more than 40% of their investment so far in 2008.

Most economists say dour economic news will continue well into next year, and analysts forecast Treasurys will continue to rise for at least several more months, pushing yields even lower. Yields on the 2-year, 10-year and 30-year Treasurys all hit record lows last week before rising slightly in the past three sessions.

The yield on the 3-month note rose held steady at 0.015%, though it has been hovering around 0% for two weeks. Yields near the zero mark on short-term bills are an indication that investors are completely risk-averse, prioritizing safety above profit.

Libor rates, which have fallen considerably since the credit crisis' peak in late October, were not tallied Friday due to the bank holiday in the U.K.

Dollar: The U.S. dollar fell very slightly against the euro but rose against the yen and pound as investors digested a barrage of economic data ahead of the holiday.

Analysts said dollar movements were very subtle due to such low trading volume, and do not reflect any trend or economic news. Markets were mostly closed abroad.