The last week of what will be forever remembered as a truly brutal year begins on Monday. 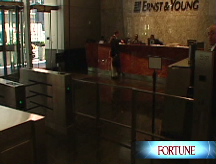 NEW YORK (CNNMoney.com) -- Investors will return Monday for the final few trading days of the year, and with all three major indexes on track to suffer their worst declines in decades, it's easy to understand why the market is eager to close the books on 2008.

The Dow Jones industrial average has tumbled 36% and is on track to suffer its worst annual decline since 1931.

The S&P 500 is off a whopping 40.5% this year, and is headed for its worst performance since the large-cap index was created in 1957. As it stands, this year's decline is already much worse than the previous record decline of 29.7% in 1974.

The Nasdaq is down 42.5% versus last year. While the tech-heavy index is on the path to its worst annual performance in its 37 year history, the Nasdaq has seen much darker days. In the 12 months that ended March 2001, it fell nearly 60% as the dot.com bubble burst.

"This has been a year of superlatives," said Hugh Johnson, chairman of Johnson Illington Advisors, an Albany, N.Y.-based firm with nearly $700 million in assets under management. "[2008] has been dark and dismal, but if I had to sum it up in one word, it would be: historic."

Underlying these historic declines has been the worst economic shock since the Great Depression, and a full-blown recession that is now entering its second year.

What started as a "downturn" in the housing market, grew into a "mortgage-meltdown," which wreaked havoc on the "global financial system" and ultimately spawned a "credit crisis."

Of course, the popping of a massive energy bubble didn't help matters.

As the problems on Wall Street spilled over to Main Street, the two became locked in a "negative feedback loop," said Johnson.

In other words, concerns about the health of the economy put pressure on the stock market, which further undermined the economy, driving stocks down further and putting more strain on the economy.

While these things played out, the nation lost nearly 2 million jobs.

In response to these historic events, governments around the world have taken unprecedented steps, including drastically lowering interest rates and making direct investments in some of the largest financial institutions.

Given the extraordinary challenges facing the world economy, what can investors expect going into 2009?

"The current consensus is that the economy will recover in the second half of 2009," Johnson said. "But the consensus tends to be wrong."

Based on historical patterns, however, an economic recovery could come suddenly and dramatically, Johnson said.

"Turning points can be very sharp and completely unexpected," he said. "Very few will see it coming."

As for next week, trading is expected to be choppy, with the market closed Thursday and many market participants on vacation. But investors will have a few economic reports to digest.

On Tuesday, the Conference Board will release its December index of consumer confidence, which is expected to rise to a reading of 45.2 from 44.9 in November. That would still be at the low end of the index on a historic basis, which reached an all-time low of 38.3 in October.

The Labor Department will report on weekly jobless claims Wednesday, after a 26-year high of 586,000 initial filings in the week ended Dec. 20.

Investors will get a fresh reading on the manufacturing sector Friday when the Institute for Supply Management releases its December survey of purchasing managers. The ISM index is expected to fall to a reading of 35.4 from a 26-year low of 36.2 in November, according to consensus estimates compiled by Briefing.com.

In corporate news, two of the nation's top automakers, General Motors and Chrysler LLC., will take possession on Monday of the first part of the $13.4 billion in emergency loans from the government.

Trading could be volatile next week due to low volume and selling related to year-end tax loss strategies.