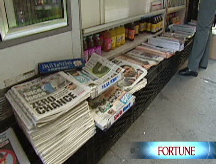 Turns out that Google CEO Eric Schmidt professes a passionate desire to lend a hand. In an interview with Fortune's Adam Lashinsky, he shares some thoughts on how newspapers might yet survive - and how Google (GOOG, Fortune 500) might help.

Is there some grand gesture Google can make to solve the newspaper industry's problems?

It's not obvious what the grand gesture would be. Google can't make the cost of newsprint go down. We also can't materially change the way consumers behave, and consumers are in fact moving their lives online. We have been able to send clicks to their Web sites, which they can monetize. So that provides some revenue. The problem is that doesn't provide enough revenue to offset the loss of the other revenue.

Maybe their time has just come and gone?

No. They don't have a problem of demand for their product, the news. People love the news. They love reading, discussing it, adding to it, annotating it. The Internet has made the news more accessible. There's a problem with advertising, classifieds and the cost itself of a newspaper: physical printing, delivery and so on. And so the business model gets squeezed.

So what else can Google do?

We have a mechanism that enhances online subscriptions, but part of the reason it doesn't take off is that the culture of the Internet is that information wants to be free. We've tried to get newspapers to have more tightly integrated products with ours. We'd like to help them better monetize their customer base. We have tools that make that easier. I wish I had a brilliant idea, but I don't. These little things help, but they don't fundamentally solve the problem.

How about just buying them?

The good news is we could purchase them. We have the cash. But I don't think our purchasing a newspaper would solve the business problems. It would help solidify the ownership structure, but it doesn't solve the underlying problem in the business. Until we can answer that question we're in this uncomfortable conversation.

I think the solution is tighter integration. In other words, we can do this without making an acquisition. The term I've been using is 'merge without merging.' The Web allows you to do that, where you can get the Web systems of both organizations fairly well integrated, and you don't have to do it on exclusive basis.

If not buy, how about just pump some cash into them, the way Microsoft famously once did with Apple?

There are no current plans to do that. The necessary criteria to get us to make that decision are not currently in place.

Are there other types of structural solutions that are possible?

Well, today you have these for-profit companies that are in a terrible business situation who support an important public good. What's an alternative way to support the public good? One is Pro Publica [the non-profit investigative journalism organization headed by former Wall Street Journal Managing Editor Paul Steiger and funded by, among others, the Sandler Foundation]. Plus there'll be consolidation. One scenario says newspapers become part of larger companies. [The Washington Post, for example, is part of a company that makes a considerable portion of its money in the education business]. They're clearly not going to fold because their value is too large.

What about Google.org, Google's for-profit philanthropic arm, which is investing in alternative-energy startups?

We didn't want to co-mingle philanthropy with business. We are in the advertising business.

But you do believe it's important that newspapers survive?

Not only do we believe that, but I've been outspoken about it because I want everyone to get that. The fundamental question you're asking is why does Google not write large checks to newspapers? We're careful at Google with our money. We write large checks when we have a great strategy. And we don't yet have that strategy.

What if the newspaper industry does go down?

To me this presents a real tragedy in the sense that journalism is a central part of democracy. And if it can't be funded because of these business problems, then that's a real loss in terms of voices and diversity. And I don't think bloggers make up the difference. The historic model of investigative journalists in any industry is something that is very fundamental. So the question is, what can you do about this? And a fair statement is, we're still looking for the right answer.