The 30 year fixed rate fell to 5.01%, its lowest level since Freddie Mac started conducting its survey in 1971.

Paste this link into your favorite RSS desktop reader
See all CNNMoney.com RSS FEEDS (close)
By Larissa Padden, CNNMoney contributor
Last Updated: January 8, 2009: 11:32 AM ET
Got a grand? Get a house 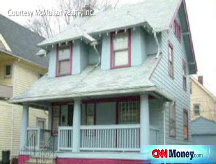 Government sponsored mortgage lender Freddie Mac said Thursday that fixed rates on 30-year mortgages averaged 5.01% for the week ending Jan. 8th. That's down from 5.10% last week and well below 5.87%, which is where the rate stood at this time last year.

The 30-year fixed rate mortgage has not been lower since Freddie Mac started conducting the survey in 1971.

"On November 25, 2008, the Federal Reserve announced that it planned to purchase up to $500 billion of these securities by the end of June this year. For the sake of comparison, there were roughly $4.7 trillion of such securities backed by home mortgages available as of September 30, 2008," Nothaft said in a release Thursday.

Five-year Treasury-indexed hybrid adjustable-rate mortgages (ARMs) averaged 5.49% this week, down from last week when they averaged 5.57%. At this time a year ago, the 5-year ARM averaged 5.63%.