Here's how it could be worse

During the Bush administration, proposals to privatize Social Security were in vogue. Here's why today's retirees can be very happy it didn't happen. 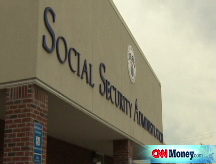 NEW YORK (Fortune) -- If your year-end 401(k) statement made you feel like barfing, I have one consolation for you: it could be worse. How's that possible, given how horrible last year was for investors? Simple: If you're not close to retirement, you've got time to recover.

If you're in the retirement-age zone, as I am (I'm 64), at least you've got the option of hanging on until things get better. If you're in the mandatory-withdrawal part of life (more than 70 ½ years old) or just need some retirement cash, you can take a minimal distribution this year and hope for the best.

If, however, you were forced to buy a lifetime annuity with your current balance - when you buy such an annuity, you trade your cash for a series of guaranteed payments for the rest of your life - you'd be making your loss permanent. That's how things could be worse.

Current Social Security benefits, of course, are set by a formula that isn't affected by markets moving up, down or sideways.

I'm a big fan of individual initiative and saving - but a year like 2008 gives you an idea of how risky investing can be. If you have to cash out at a particular time, you might make out well (during market highs of October of 2007) or terribly (now).

Let me give you an idea of what we're talking about, using numbers that I commissioned from Vanguard. Let's say a couple about to turn 66 had $500,000 in their account at year-end 2007 and used it to buy a joint-and-100%-survivor annuity. This is a common type of annuity, which guarantees a reliable income stream until the longer-lived spouse dies. Vanguard would have paid these folks $3,005 a month. (See the assumptions behind the numbers below.)

Why these huge differences - $505 to more than $1,000 a month for life - when we're talking about couples who start collecting only a year apart, just after each turns 66, the current age for getting full Social Security retirement benefits?

It's because of two main factors that determine annuity payments - the market value of their account (the higher, the better), and long-term interest rates (ditto).

I'm not shilling for Vanguard or recommending that you buy an annuity from AIG. I asked Vanguard for annuity numbers because it's a low-fee outfit, is effectively owned by its customers rather than by profit-hungry Wall Street types and wasn't part of the privatize-Social-Security crowd.

Should things go well in the markets this year, next year I could be writing about how much better off you'd have been buying an annuity at year-end 2009 than at year-end 2008.

That's the point. It's fine for you to take market and timing risks if your basic retirement needs are already being met with your own sources of income. It's another thing to have to take those risks with your eating money, which is what Social Security represents for perhaps two-thirds of retirement beneficiaries.

If you want to supplement Social Security with private accounts, I'm all for it. But the disparity we've just seen shows why it's wrong to force people to depend on the markets for eating money.

Someday, Social Security privatization will come back into vogue. When that happens, I've got two words that will remind you why it's a bad idea: Remember 2008.

Assumptions behind the numbers

Husband and wife were both born on Jan. 9, 1942 (for 12/31/07 annuity buyers) or on Jan. 9, 1943 (for 12/31/08 buyers.) They collect their first payments on Feb. 1, 2008 and Feb. 1, 2009, respectively. Unlike Social Security retirement benefits, these annuities aren't tied to the Consumer Price Index. Social Security has a variety of retirement payment schedules, none of which is a joint-and-100%-survivor option. I asked Vanguard for joint-and-100% without a CPI adjustment to avoid having to give you so many scenarios that the trees would obscure the forest.

When will stimulus work?
Social Security a Ponzi scheme? No way