As companies cut costs, social responsibility may seem like an easy target. But many big names are sticking with the program. 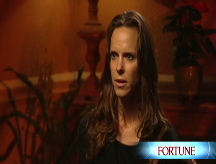 NEW YORK (Fortune) -- It has been a tough season for Intel, the world's largest chip maker. Intel's (INTC, Fortune 500) stock price slipped 42% in 2008 and its fourth-quarter numbers were poor, with net income off 90% from a year earlier. In such a difficult economic environment, cuts to non-essential spending would seem natural, like the company's substantial corporate social responsibility (CSR) programs around the world.

Not the case, says Intel. Days before releasing its fourth-quarter results, the company launched the Small Things Challenge, a commitment of up to $300,000 to education and development in countries like Afghanistan, Cambodia, Haiti and Uganda in partnership with non-profit groups Kiva.org and Save the Children.

That's part of the company's pledge to maintain its commitments in 2009, which includes $100 million for global education programs from the Intel Foundation ($1 billion has gone to the cause over the past decade) and such green investments as energy conservation efforts (a $20 million investment since 2001) and the purchase of 1.3 billion kilowatt hours of renewable-energy certificates.

"You can't save your way out of recession - you have to invest your way out," Intel chairman Craig Barrett told Fortune. "We look at our CSR activities in pretty much the same way: you can't just do them in good times and then just forget about them in bad times and hope to get any results."

As recession-battered companies struggle to cut costs, money spent on microfinance projects in India or using more expensive environmentally-correct packaging might seem like obvious ways to save.

But a surprising number of companies see corporate responsibility as all the more important given the financial crunch, even as they reduce spending elsewhere in their businesses. Indeed, proponents of CSR like General Electric, Intel, PricewaterhouseCoopers and Wal-Mart (WMT, Fortune 500) are sustaining or expanding their commitments, at least for now.

"Corporate responsibility is a nearly recession-proof commitment because it's become so mainstream," says Bennett Freeman, senior vice president for social research and policy at the Calvert Group, a leader in socially responsible investments, with about $13 billion under management. "That said, the resources to back the commitment are not recession-proof, and even the most committed are no doubt going to look for ways to cut costs."

To be sure, some companies are revaluating their efforts. Many will likely reduce their commitments to matching-grant programs for employee charitable giving, disaster relief funds, or business units focused on sustainable investments.

Ford Motor Co. (F, Fortune 500) is reducing its funding for corporate philanthropy by 40% from last year; Citigroup (C, Fortune 500) has reduced its corporate responsibility-focused staff along with job cuts across the company; and American Electric Power (AEP, Fortune 500) has slowed environmentally-friendly projects like a wind farm in Indiana and a natural gas-fired power plant in Ohio. "We have not backed away from any of our sustainability commitments, but some may take longer to achieve," AEP said in a statement.

Corporate responsibility's surprising staying power is illustrated by a recent survey by Boston College's Center for Corporate Citizenship. It found that half of companies believe corporate citizenship will "become more critical to corporate reputation and business success" and less than ten percent forecast a lesser role.

Another tally, by Business for Social Responsibility, a business network and consultancy, found that 43% expect CSR budgets to go unchanged, although 31% said it would decrease.

"This recession is wiping away a lot of things, but so far, corporate responsibility seems to be a survivor," says Aron Cramer, the group's president and CEO, noting that members of BSR's board, including IKEA, Microsoft (MSFT, Fortune 500), Rio Tinto (RTP), Chiquita (CQB, Fortune 500), and Shell indicated in November that corporate responsibility budgets had been sustained for the time being.

General Electric (GE, Fortune 500) is also staying the course on CSR. Its stock price declined 55% in 2008, but the company isn't cutting is citizenship efforts. GE says it gave $160 million in charitable donations, employee time and matching gifts in 2007 and it expects that commitment to be roughly the same for 2008 and 2009.

GE recently expanded its program that provides health-care equipment and training in places like Honduras and Kenya and has committed extra money from its foundation towards basic needs like food, clothing and shelter for needy Americans.

The company's abiding commitment was emphasized by Jeffrey Immelt, GE's Chairman and CEO. "When we come out of this fog, this notion that companies need to stand for something - they need to be accountable for more than just the money they earn - is going to be profound," Immelt said at the Business for Social Responsibility conference in November.

Apart from corporate philanthropy, GE's ten-year, multibillion-dollar investment in environmentally friendly practices and products, dubbed "ecomagination," is more lucrative than ever: revenues are up 21% at more than $17 billion for 2008 and more is expected as the Obama administration looks to invest in many of GE's sweet spots like solar panels, clean-coal power plants and electronic health-care records, says Bob Corcoran, vice president for corporate citizenship.

Starbucks (SBUX, Fortune 500) is taking a similar, long-term approach. As the company grew to an enormous size and brought in large returns for shareholders, it invested heavily in CSR, working to reduce its greenhouse-gas emissions; paying poor Colombian and Ethiopian farmers more for "fair trade" coffee beans; and producing detailed reports on its progress towards do-good social goals.

But Starbucks' stock lost more than half its value in 2008, frustrating investors. CEO Howard Schultz responded quickly, in December outlining more than $400 million in cost reductions for the 2009 fiscal year. But there was one area that escaped relatively unscathed: corporate responsibility. While Starbucks will cut some undisclosed costs, it recently launched a (Product) RED card to benefit African HIV and AIDS programs and plans to become the world's largest purchaser of fair trade coffee this year, among other efforts.

Short-term thinking in a recession can lead to the "false belief that investments in people and training can wait; that corporate social responsibility can be put on the back burner," Schultz wrote in a November essay in the Huffington Post. "Now is a time to invest, truly and authentically, in our people, in our corporate responsibility and in our communities. The argument - and opportunity - for companies to do this has never been more compelling."

How strongly companies feel committed to CSR depends on how it's viewed as part of the business. "Those that still see environmental and social performance as largely divorced from their core business model and overall reputation are more likely to cut back in these tough times," says Eric Biel, managing director of corporate responsibility at global public relations firm Burson-Marsteller, emphasizing the point made by Starbucks, GE and Intel. "But leadership on corporate responsibility is not like a spigot that can be turned on when things are going well."

Newman's Own after Paul
Related Articles