As a tough job market sends workers back to school, shares of for-profit educators are earning high marks. 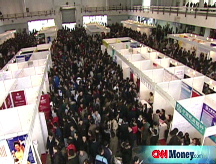 NEW YORK (Fortune) -- A 7.2% unemployment rate may be a sure sign of a lousy economy, but it can also spell opportunity for publicly traded education companies.

In tough times, for-profit school businesses such as Apollo Group, DeVry, ITT Educational Services and Strayer Education have traditionally fared well, as more workers, including the newly unemployed, look to enroll in classes to upgrade their skills.

As Apollo Group CEO Chas Edelstein noted earlier in January when he announced impressive quarterly results: "While we cannot quantify the significance of the current economy on our growth, we believe we are experiencing a positive impact."

The sector also got a boost earlier in January on reports that Congress' economic stimulus package would increase federal student loan limits - the major source of tuition payments for students at for-profit schools, according to analysts.

School stocks jumped on the news, with Apollo Group (APOL) up almost 8%, and DeVry (DV) and Strayer (STRA) up about 5% each. ITT Educational Services (ESI) rocketed more than 15% and Corinthian Colleges (COCO) surged nearly 18%.

But even before that jolt, the stocks were already thriving in a tough economy. For 2008, Apollo posted a 9% gain, even as the S&P 500 (SPX) lost 38%. Shares also popped more than 10% after the company's recent earnings announcement. After closing near $87 on Tuesday, Apollo has more than doubled in value from its 52-week low of $38. Similarly, DeVry rose more than 10% last year, and ITT climbed more than 11%.

"If it isn't the best area given the current economic environment, it's certainly one of the best," says Ed Nicklin, co-manager of the $640 million Westport Select-Cap fund, which counts both DeVry and ITT Educational Services among its top holdings.

The big stock on campus

Apollo Group is the behemoth of the sector. The company is the parent of the University of Phoenix, which is the largest private university in the U.S. Earlier in January, Apollo reported fiscal first-quarter earnings climbed 29% and easily beat analysts' estimates. Revenue jumped 24%.

Enrollment climbed 18%, boosted by a 25% surge in new students. That means Apollo grew by more than the entire enrollment size of some of its competitors. The growth helped boost operating margins by 3.5 percentage points to 31.6% for the quarter.

ITT is due to report fourth-quarter earnings on Jan. 22, and DeVry will release its quarterly results Jan. 27. Strayer is set to report Feb. 12.

Apollo offers online degree programs for working adults and also has campuses and learning centers in 39 states. The company has recently moved beyond adults to target younger students with an associate degree program at its Axia College. These associate degree students made up less than 2% of Apollo's enrollment in 2003, but they now account for more than 40%.

Students in associate degree programs pay lower tuition, bringing in less revenue than those in bachelor or graduate programs, which could pressure margins, and they also tend to be less financially stable. Yet Morningstar analyst Todd Young says the growth in this area is a smart strategic move for a couple of reasons.

"First, Apollo is able to leverage its 30 years of experience and strong reputation in education to build out this market segment and bring in additional revenue," Young wrote in a recent report.

"Second, by getting students early, at a lower price point, Apollo is able to expand in other areas," he wrote. "As associate students graduate, some of them move on to Apollo's bachelor programs, helping fuel growth in that higher-revenue area. Additionally, these transfer students have lower drop-out rates, keeping retention high and revenue up."

DeVry has also improved earnings and revenues as the company continues a turnaround plan initiated several years ago when the business was struggling and fewer students were seeking technology-related degrees.

Under president and chief executive Daniel Hamburger, DeVry has cut costs and expanded beyond its focus on information technology to grow in areas such as health-care education. Last year, the company spent $290 million to acquire another for-profit school company, U.S. Education, a move that added two colleges that specialize in nursing, dental hygiene and other medical fields.

DeVry has also boosted enrollment, with new undergraduates up 20% this fall compared with the same period in 2007. Operating margins have rebounded to 15% in 2008, compared with 3.9% in 2005, and they have room to grow further, analysts say, as the company's health-care and professional segments grow.

"I personally like DeVry the best of the group," says Standard & Poor's analyst Michael Jaffe, who tracks three other for-profit education companies. The turnaround efforts, he says, are working well and should continue to yield benefits. ""It's been working quite well for them."