Housing stocks: No bottom yet

If you think the sector has gone as low as it can, think again, says housing guru Ivy Zelman. 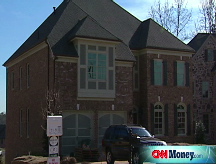 NEW YORK (Fortune) -- With another dismal read Thursday on new home construction, it looks like 2009 will be a rough year for homebuilders. But recent rallies in housing stocks suggest that investors think otherwise.

Housing permits and starts both tumbled to record lows in December, according to a Commerce Department report on Thursday. With foreclosures surging and a glut of homes on the market, Zelman believes the overall pain will continue well into 2010 - and that the market won't bounce back until 2012.

Zelman, who decried speculation earlier than most other analysts, is known for her candor. Before starting her own research company, Zelman & Associates, in 2007, she spent ten years at Credit Suisse, where she began warning about speculation in 2004. Zelman called for a sell off of all builders in 2006 - well before many other analysts urged their clients to dump homebuilder stocks.

Two years ago, when Toll Brothers' CEO Robert Toll said in an earnings call that there was pent-up demand for housing, Zelman famously told him, "I'm wondering which Kool-Aid you're drinking - because I want some." The next year, Toll Brothers posted a 95% drop in profits.

Signs of a recovery?

Few in the housing industry are still drunk with optimism, but recent upswings suggest that investors are dipping their toes back in market. The S&P Homebuilders' Index rose 15% in December (it fell 36% in 2008). Toll Brothers and Pulte Homes, two major building companies, were, respectively, the 12th and 14th best stock performers in the Fortune 500 last year.

But according to Zelman, it's way too soon for a rebound. "The economics don't make sense," she says. "There's still a tsunami of expected foreclosures, and that has to abate before there's a recovery." Credit Suisse forecasted in December that, over the next four years, 8.1 million mortgages would go into foreclosure.

When foreclosures hit, cheap houses that banks are eager to unload flood the market. The oversupply and the lack of demand pushes prices down; the S&P Case Schiller Home Price Index showed an 18% year-over-year drop in October, (the most recent data available). As home values fall, homeowners owe more in mortgages than their properties are worth and are more likely to default - and then the cycle begins all over again.

While declining home prices hurt homeowners, they can boost sales - as evidenced in Southern California, where new home sales were up 50% in December compared with last year, according to MDA DataQuick, a real estate research firm.

But Zelman casts a critical eye on those who think cheap houses signal a revival. "Affordability is being paraded as the best thing," she says. "That may be so nationally, but it's skewed to areas where prices overshot."

She points to Fort Myers, Fl., where she says 80% of sellers are listing their homes at prices that are still 20% higher than they should be. Zelman believes that prices must overshoot on the way down, just as they did on the way up - and price deflation, she says, has a long way to go.

What to look for

Instead of affordability, Zelman sees new home sales per neighborhood as a leading indicator for the housing market. Of the 19,926 homes sold in Southern California last month, for example, just 1,813 were newly-built, compared with a December average of 4,926.

Most of the houses being scooped up are foreclosed houses, which Zelman believes are being bought by investors. When new home sales go up, she says, it will be a sign that homeowners are selling their existing homes.

The other indicator that Zelman is watching is the consumer balance sheet, or the average home buyer's debt level. "The consumer has terrible, crazy credit right now," she says. "And there's a negative psyche towards their deflating asset - that keeps homeowners on the sidelines, because foreclosures are driving prices lower, jobs are being lost, and 401(ks) are being eroded."

Signs of a consumer recovery, says Zelman, include an increase in personal savings rate and higher lending levels.

Zelman doesn't believe that any of the proposed stimulus measures on the federal or state level, aside from "the government bulldozing foreclosed houses or buying them up," are substantial enough to stop the downward spiral. She projects that just under half of all private homebuilders - which compose 75% of the industry - will go out of business by the time the market bottoms. That creates market opportunity for the surviving builders, but not for several more years.

"Right now, I don't like the builders as investments," says Zelman. The only "investable company" right now, she says, is Virginia based NVR, which she believes is better suited to weather the storm because it's positioned in healthier markets such as Washington D.C. Other relatively healthy markets, she says, include Texas and Salt Lake City.

For now, Zelman remains bearish towards the rest of the sector - just as she has been for four years. "There's still a lot of false optimism," she says. "Some economists believe that we're close to a bottom, but we're just more than halfway there."

Get a low down payment loan
Related Articles