Your TARP funds at work, on Wall Street

Who said the big banks were out of the merger game? Author William Cohan says the Pfizer deal shows that cash is king - and that they've got it. 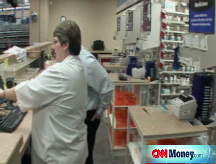 (Fortune) -- Pfizer's blockbuster $68 billion acquisition of Wyeth sure has the whiff of nostalgia about it. Not only was the deal announced on a Monday morning after a weekend of furtive negotiating - when was the last time a major deal, rather than a bailout, was announced on a Monday morning? - but also its massive size and the fact that seven banks "advised" on it also seemed to be a return to the good old days of 2006 and early 2007 when Merger Mondays were all the rage.

But throwbacks aside, and far more important, the deal provides a first - and a bit surprising - glimpse of what the new Wall Street pecking order may look like.

The conventional wisdom since the Lehman Brothers bankruptcy on Sept.15 was that the large, money-center Wall Street banks were essentially out of business and desperately preoccupied with licking their many self-inflicted wounds. The thinking was that this development would take many years to resolve itself and that it would end up favoring the boutique firms, such as Lazard (LAZ) and Greenhill, that had stuck to their knitting of providing financial advice and asset-management services while avoiding the underwriting of the toxic securities - such as mortgage-backed securities and derivatives - that had mortally wounded their competitors.

The Pfizer/Wyeth deal should have been the perfect showcase for the evolution of Wall Street in favor of these smaller, more focused firms. Especially so, since, for the greater part of 30 years, Pfizer (PFE, Fortune 500) has been a Lazard house account. For years, Felix Rohatyn, Lazard's onetime uber-banker advised one Pfizer CEO after another on the construction of the drug behemoth. He served on the Pfizer board of directors for 26 years.

When Rohatyn left the firm in 1997 to become U.S. ambassador to France, the Pfizer account was the rare instance when he successfully - and willingly - passed the account on to one of his longtime partners, in this case Steve Golub, now vice chairman of the firm. Golub did a marvelous job managing the account for many years, winning for Lazard a coveted role as one of two M&A advisers on Pfizer's $90 billion 2000 acquisition of Warner-Lambert and, again, as one of two advisers on its $60 billion acquisition, in 2003, of Pharmacia. In 2006, Golub and Lazard advised Pfizer on its $16.6 billion acquisition of the consumer health-care business of Johnson & Johnson.

In the last few years, Pfizer shied away from the gargantuan deals it had done in the past as new CEO Jeffrey Kindler got his hands around the complex business and was focused on cost-cutting, and Lazard still managed to advise Pfizer on a string of smaller - but no less prestigious - tuck-in acquisitions.

But this time, in what must be a source of great frustration for the proud partners on the 62nd floor of 30 Rockefeller Plaza, there was no role for Lazard in the deal for Wyeth (WYE, Fortune 500). And the reason why begins to illustrate the new reality on Wall Street. As part of Pfizer's deal to acquire Wyeth, Pfizer offered Wyeth shareholders $22.5 billion in cash - along with the $45.5 billion in Pfizer stock - and it needed to raise that money from the banks that have the capability to provide such vast sums, freed up by infusions from the $700 billion Troubled Asset Relief Program, or TARP.

Lazard not only has received no TARP funds -- its balance sheet is relatively pristine - but it also does not make corporate loans of any substance and never has. The banks that provided the one-year bridge loan financing for Pfizer -- Bank of America/Merrill Lynch, Goldman Sachs (GS, Fortune 500), JPMorgan Chase (JPM, Fortune 500), Citigroup (C, Fortune 500) and Barclays - were in the enviable position of being able to demand an advisory role - and a commensurate fee - in the deal. (Bank of America, Goldman and JPMorgan were the lead advisors on the deal, Pfizer felt compelled to explain.) In the past, only Merrill Lynch had had a meaningful relationship with Pfizer.

That left Lazard out in the cold, for what may prove to be the biggest M&A deal of the year. In a perverse way, the marketplace - with a helping hand from the U.S. government - has, in this instance, rewarded those firms that needed, or took, federal assistance, at the expense of a firm with a long-standing relationship that has cost the taxpayers not a dime. True, Lazard might have been in the pole position had the deal been an all-stock transaction, where no cash was needed, but the fact that it had no role at all - despite its longstanding relationship - somehow does not feel right. Nevertheless, for deals requiring cash, and as long as the credit markets remain sluggish, the new paradigm might just favor the firms the government helped save. Maybe this is what former Treasury Secretary Hank Paulson had in mind all along.