Most of the $819 billion stimulus package will go to states to support education and other services. Facing huge budget gaps, they need the lifeline. 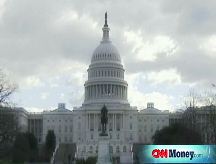 States could get more than two-thirds of the $819 billion stimulus package approved by the House Wednesday, according to some estimates. The vast majority of the money will be allocated for specific programs, such as highways, unemployment, Medicaid, government bond tax incentives and education. But governors will also get some funds to plug their budget gaps, estimated at $91 billion for fiscal 2009.

These deficits have forced states to make harsh spending cuts, especially to education and social service programs. The federal funds aim to help mitigate these reductions, as well as stimulate the economy and support residents suffering from the downturn.

Even though much of the federal money is targeted for specific purposes, the funding will relieve some general budget pressures. For example, state officials will use stimulus funds for education and Medicaid and then direct their own tax revenues to other state spending needs.

"There will still be some cuts, but those cuts will be significantly reduced," said Pennsylvania Gov. Edward Rendell, who heads the National Governors Association.

States will receive a nice chunk of change. California, for instance, could get a total of $63.4 billion, 12.3% of which can be used to balance its budget, according to the Center for American Progress. Gov. Arnold Schwarzenegger said earlier this month that California is "in a state of emergency" and faces insolvency within weeks in the wake of a projected $42 billion deficit.

The states will also benefit from the increases in food stamp, unemployment and other aid -- as well as the infrastructure measures that put people back to work. Some of this money will come back to the states as income and sales tax revenue, giving a much needed boost to their budgets.

While lawmakers and economists debate whether the stimulus package -- and accompanying tax cuts -- will turn around the national economy, experts interviewed say the states should be the ones to put the money to work.

"They can distribute the money rapidly and into programs that voters have supported in the past," said Kevin Hassett, director of economic policy studies at the American Enterprise Institute.

Still, even with the federal assistance, states are in for rough times. Recessions usually pummel state budgets for 18 months after the national economy starts to turn around. The current recession began in December 2007 and is not likely to end soon.

"It's a Band-aid," said Michael Bird, federal affairs counsel at the National Conference of State Legislators. "It gives the states a little bit of relief from some of the budget cutting they've had to do. But states will continue to make cuts. We are still headed downhill."

The Senate is expected to vote on its version of the stimulus package next week and, if they differ, the two chambers will have reconcile their bills thereafter.

Here's how the House would allocate some of the funds to the states:

Infrastructure: provides about $35 billion to build highways, construct commuter and light rail systems, purchase buses and modernize existing transit systems. Half the money must be allocated to projects within six months.

Education: provides billions for a wide range of education programs, from $20 billion for renovating schools to $26 billion for maintaining services for disadvantaged and special education students. Another $39 billion will go to prevent cutbacks in public education funding.

Medicaid: provides $87 billion in additional federal matching funds to help states maintain their Medicaid programs, often one of their costliest expenditures. Separately, states will receive another $8.6 billion to extend Medicaid coverage to the unemployed whose families have low incomes.

Unemployment: provides $500 million to administer unemployment insurance benefits and allows states to elect to increase benefits by $25 per worker. Provides an additional $4 billion for job training and youth services.