How the Treasury chief can help taxpayers - and rebuild his reputation. 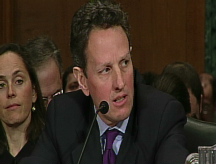 NEW YORK (Fortune) -- Tim Geithner's tax problems have made for an interesting sideshow. But the real question about our new Treasury secretary isn't his foolishness (or sloppiness) in failing to pay some of his taxes until after President Obama's folks knocked on his door. It's whether he'll have the juice - and moral standing - to fill his most important role: reassuring the public and the financial markets that someone in charge in Washington knows what he's doing.

We used to get that from former Federal Reserve Board chairman Alan Greenspan and former Treasury Secretary Bob Rubin back in the day. Both have since been shown to have feet of clay, but when it mattered, markets treated them as gods and they calmed crises down, a role that neither Hank Paulson nor Ben Bernanke ever managed to fill.

I think Geithner can overcome any deficits by quickly smacking Citi and Bank of America. Their board members too. Judging from Geithner's days at the New York Fed, he's tough enough to do it.

Citi (C, Fortune 500) and Bank of America (BAC, Fortune 500) are both in dreadful straits because of the horrible missteps they've made. They've gotten a total of $90 billion in bailout money from taxpayers on ultra-favorable terms, and taxpayers have also guaranteed many of their potential losses in return for getting $11 billion of preferred stock. That's much less than the financial markets would have charged.

One lament making the rounds is that banks are having trouble putting Uncle Sam's rescue money to work because it consists of preferred stock with dividends that cost the banks 5% to 8% (after taxes), which is far more than loans yield these days. The simple solution to the problem is this: Let the Treasury convert the taxpayers' preferred stock to common stock at current prices. That would reduce the income and protection taxpayers get from owning preferred stock rather than common stock but would give us stakes of about 70% and 50%, respectively, in Citi and Bank of America.

Such a move would accomplish what I've suggested since 2007: Dilute common shareholders massively while letting the banks stay open, lest closing them precipitate "systemic failure." The dilution would inflict pain in the right places - institutional shareholders - and perhaps cause them to police their investees in the future.

Yes, having the government own majority stakes in these banks isn't a good long-term solution. But letting them muddle around and bleed and whine isn't working really well either.

The Citi and Bank of America board members who have presided over these disastrous institutions should also be forced to feel some pain. Thousands of employees at the firms are losing their jobs, top managers have agreed to give up their bonuses (some sacrifice, though not enough), but the board members? Forget about it. They're still knocking down a minimum of $225,000 a year at Citi and $240,000 at Bank of America. (Those are 2007 numbers; Citi and Bank of America spokesmen declined to say whether board pay had been cut this year or last, which I treat as meaning there have been no cuts.)

Since the directors haven't had the decency to give back their fees, someone with a sense of the need for shared sacrifice - which I believe Geithner has - ought to spank them until they do.

We need to get back the sense that we're all in this together, that the government is doing more than just providing indefinite life support for badly managed institutions that are too big to fail. Punishing Citi and Bank of America would accomplish that.

A final thought. The prudent among us are paying twice for bailing out the imprudent: through our tax money and by having our interest income reduced by the Fed's rate cuts. It would be nice to see the imprudent pay bigtime too.