Analysts say safe-haven buying is driving the precious metal well above $900 an ounce. Some see $1,000 on the horizon. 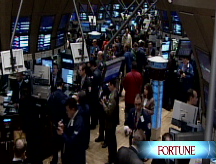 Gold for April delivery was up $20, or 2.2%, to $926.5 an ounce on the New York Mercantile Exchange. The rally extended on gold's $16 dollar advance in the previous session.

"It's continued safe haven jitters," said Jon Nadler, senior analyst at Kitco Bullion Dealers in Montreal. "With the stock markets looking as poor as they are, investors are saying: where do I park my money?"

Stock prices fell for the second day in a row Friday after the government said the nation's economy suffered its sharpest decline in 26 years during the last three months of 2008.

Gross domestic product, the broadest measure of economic activity, declined at an annual rate of 3.8% in the fourth quarter, adjusted for inflation.

While the drop in GDP was less severe than the 5.5% decline economists were expecting, it was still the largest fall since the first quarter of 1982, when the economy suffered a 6.4% decline.

Friday's report comes one day after the government released dour reports on the labor market, durable goods orders and housing.

As the recession drags on, and the economic outlook remains cloudy, many investors are turning to hard assets, such as precious metals, as an alternative to more risky bets in the stock market.

At the same time, gold's strength has drawn the attention of some large investment funds, Nadler said. The rally "encourages a lot of the sidelined money to get in," he said.

Gold holdings in the SPDR Gold Trust (SPDR), the biggest exchange-traded fund backed by gold, expanded to a record level. Gold ETFs are funds that store gold in a trust and allow investors to buy and sell shares of that trust on the New York Stock Exchange.

Meanwhile, the run-up is also attracting "retail investors" seeking to cash in on gold's luster, according to Ashraf Laidi, a gold and currency strategist at CMC World Markets in London.

With gold prices comfortably above $900 an ounce, "retail investors worldwide begin to chase the headline-grabbing trend (+$900) and drive the metal further up," Liadi said in a research note.

"If we continue to see bad economic conditions and deterioration in the financial markets, I think we could see that next month," Sanchez said in reference to the $1,000 mark.

Gold surged above $1,000 for the first time in history last March as investors sought shelter from volatile financial markets. But demand for the metal at such lofty prices proved unsustainable. It tumbled to $720 an ounce in October amid a broad selloff in the commodities markets and a prolonged dollar rally.

The U.S. dollar continued to rally against the euro Friday after a European Union report showed euro-zone inflation fell to a near-10 year low and unemployment in the region rose to a two-year high.

A stronger dollar normally pressures the price of gold since it is indicative of rising inflation. But with inflation gauges at multi-year lows, the dollar appears to be "decoupling" from gold.

This divergence from the normal trend occurred earlier in the week "as both dollars and gold were sought as safe-haven," Nadler said.