Supertech has met its match

Technology helped pull the U.S. out of the past few recessions. Not this time. 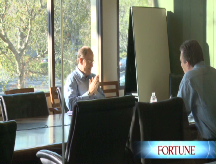 (Fortune Magazine) -- In the 1970s microchips helped jump-start the economy. In the 1980s personal computers unleashed a wave of consumer and business spending. And in the 1990s the Internet gained steam just when the economy was at its bleakest, creating new companies, jobs, and investment opportunities.

Even in 2001, when hundreds of dot-com companies went bust in the space of a year, a couple of guys were already working on a startup that would make money on web searches. (That would be Google (GOOG, Fortune 500), which now employs more than 20,000.)

Alas, economists and executives believe that this time tech won't lead the country out of its slump. Tech companies will play an important role in the recovery, but they don't see a single big idea - no semiconductors or PCs - to prime the pump. Funding for even the most promising technologies has dried up. And the country's rate of spending on new gadgets is slowing.

"I have every confidence in the Valley," says Silicon Valley eminence grise Bill Coleman. He joined Sun Microsystems in its early days, co-founded software company BEA Systems, and now heads a cloud computing company called Cassatt Corp. But the next round of explosive growth in tech, he admits, "is not going to come tomorrow."

If the economic outlook feels bleak today, consider how bad the country was feeling in the 1970s. California was particularly moribund when, in 1971, a startup called Intel (INTC, Fortune 500) created the first microprocessor. By 1978, Intel employed 15,000, posted $44 million in profits, and inspired countless startups.

Not only did those companies create jobs for engineers, but they also had a positive impact on the broader economy. Businesses and consumers were able to do things faster and with less effort, boosting productivity and economic growth. By last year U.S. spending on information technologies had grown to 7% of GDP, up from just 0.5% in 1978.

In 2009, after almost 30 years of continuous growth, tech spending as a percentage of GDP is expected to fall. The next new things - software delivered as a service over the Internet, software for mobile devices - are promising, but they are not necessarily the kinds of businesses that produce thousands of net new jobs or generate billions in new revenue overnight.

What's more, even if the ideas are there, the money to grow them isn't. Venture capitalists have started to turn cautious about the startups they fund as their backers - endowments and institutional investors - pull back on their venture investments. (Some strapped institutional investors are having trouble ponying up cash they've already committed.) Venture funds, meanwhile, aren't performing the way they used to. In 1998 venture capitalists invested $14.1 billion in 1,930 information technology companies, and 50 of them went public, posting returns of $2.7 billion. Last year venture funds sunk the same amount of money into roughly the same number of tech companies, and only two went public, returning a paltry $249 million.

Mark Heesen, president of the National Venture Capital Association, worries that his members are shut out of deals partly because an Internet-based tech company today really doesn't need a lot of money to get started. "The only way we get back into the game is by finding a game changer, a fundamental technology that will alter the existing IT structure," he says, adding, "But is there one?"

Many forward-thinking venture outfits, such as Kleiner Perkins Caufield & Byers, have de-emphasized information technology in recent years in favor of an industry that is just taking root: clean technology. The federal government's stimulus package is likely to provide incentives for entrepreneurs to train their eyes on new energy sources, such as solar. But those ideas require massive capital investments and will take a much longer time to commercialize - and make money - than their computing predecessors did.

Not everyone has written off the potential of the big tech idea. Indeed, the moment that conventional wisdom suggests that innovation is dead is probably the perfect time to go peeking inside Palo Alto garages again. As IHS Global Insight senior economist Luke Tilley reminds us, "When the personal computer came on the scene, someone surely said, 'Yeah, but how big could that be?'"