A cultivated crop of businesspeople are building the ultimate status symbol: museums to house their art collections. The good news? They're open to the public. 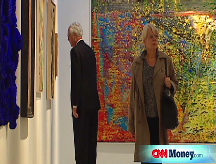 (Fortune Magazine) -- On the edge of Paris, on a site that once housed a decrepit municipal bowling alley, an opulent new museum is taking shape. Designed by Frank Gehry at a cost of more than $200 million, it is expected to be finished in two years, and will feature a giant auditorium and a permanent collection of modern and contemporary art, including works by Mark Rothko, Francis Bacon, Takashi Murakami, and Damien Hirst.

The project isn't being undertaken by the French government or by a deep-pocketed civic group. It's backed by a businessman: Bernard Arnault, the French luxury-goods billionaire whose LVMH Group owns brands including Louis Vuitton, Dior, and Dom Prignon. Arnault is famously reserved, but ask him about the museum, which is funded by an LVMH foundation, and he turns exuberant.

"It will be unique," he promises, "because of the architecture, but also because artists of international renown will do creations inspired by the place." He walks around a scale model that is parked in a cavernous hallway at LVMH headquarters on Avenue Montaigne, talking enthusiastically about the technical challenges involved in construction. The design calls for a core white building wrapped in a glass superstructure - "an iceberg dressed in a cloud," as his cultural advisor, Jean-Paul Claverie, describes it.

Arnault's vision is his own, but his art aspirations are part of a growing trend. No longer content with benefactor billing at existing institutions, wealthy businesspeople around the world are breaking ground on the ultimate status symbol, and one that's still a socially acceptable splurge in the current economic climate: private museums that are open to the public.

Arnault's crosstown rival François Pinault, who owns Gucci Group, is an avid collector who has opened his own contemporary art museum at Venice's Palazzo Grassi.

In Istanbul, the Koç and Eczacibasi families, who made their money in heavy industry and pharmaceuticals, respectively, recently started separate modern art museums, joining the Sabanci family museum, which has begun staging exhibitions of artists including Picasso and Rodin.

In Ukraine, steel tycoon Victor Pinchuk opened his arts center in 2006. Some of the splashiest shows have been staged in Moscow, where collecting has become a passion for wealthy wives and girlfriends.

Here in the U.S., where private museums are a longstanding tradition (the Barnes Collection in Philadelphia, the Frick in New York City), a new crop of wealthy art lovers, including Wal-Mart heir Alice Walton and SunAmerica founder Eli Broad, have art centers of their own underway or recently completed.

These new patrons, many of whom undertook plans to build when the stock market was soaring, have been a big driver of art prices: Pinchuk has spent liberally on Jeff Koons and Damien Hirst, while Roman Abramovich, the oil oligarch and owner of the Chelsea Football Club, spent $120 million last May on works by Francis Bacon and Lucien Freud that are likely to land in his girlfriend's exhibition space.

The global economic crisis, however, is cooling some of this acquisitive fervor. Auctions of contemporary Russian art, for example, have been red-hot for several years, but the most recent ones in London "did very badly," says Matthew Bown, a former gallery owner who tracks the Russian art scene on his blog IZO.

Still, patrons like Arnault show no signs of scaling back their plans. Arnault says he has long had "a desire to speak in a different way" to customers, shareholders, and employees of the group. But clearly there's more than a touch of ego involved. Arnault's cultural advisor, Claverie, who introduced Arnault to Gehry by taking him to see the architect's striking museum in Bilbao, says the new center will raise Arnault from being "just" a successful CEO to being, as he puts it, "an actor of civilization." One thing's for sure: In this economy, being known for something other than business can't be a bad thing.

The luxury market loses its luster

The richest city in the world
Related Articles