The truth about stimulus and the Depression 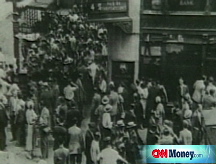 NEW YORK (Fortune) -- You often hear President Obama's stimulus plan referred to as the new New Deal. So it shouldn't come as a surprise that some critics of the stimulus aren't big fans of Franklin Roosevelt either. In fact, if you've been following the debate, you may have heard a surprising number of people put forth the notion that the New Deal actually prolonged the Great Depression.

If that doesn't sound like anything your high school history teacher taught you, you're not alone. So let's take a closer look at what the New Deal's critics are claiming.

It's inarguably true that in the very short-term, the New Deal did not fix the economy. Roosevelt's programs were first passed in 1933 but economists generally agree that the Great Depression did not end until 1939, when the country began preparing for World War II. Unemployment rates, which reached as high as 25%, took several years to recover and did not get below 9% until 1940.

Critics say the New Deal failed because some of the government's actions suppressed competition, slowing the economy's ability to rebound. A central culprit was the National Recovery Administration (NRA), from 1933. The goal of the NRA was to lift wages for workers. But to do this, it encouraged industry leaders to meet and establish minimum prices and wages, effectively creating cartels. The result was wholesale prices rising 23 percent in two years.

It's hard to find anyone now who will defend the NRA, which academics agree was a bad program because it stifled competition. It was obvious to people even then that the NRA was seriously flawed; in 1935, the Supreme Court ruled the program unconstitutional

"Anytime you put in price and wage controls, you are more likely than not to make the economy worse off," says Valerie Ramey, professor of economics at University of California, San Diego. "That's the lesson of all economic history."

Economists differ, though, in their estimates of how badly the NRA's bad policies damaged the economy. On the more dire end of the scale, Harold L. Cole and Lee E. Ohanian, economics professors at the University of Pennsylvania and UCLA respectively, estimate the New Deal's labor and industrial policies caused the Depression to last seven years longer than otherwise. (Here's one of Cole and Ohanian's papers.)

But it's important to remember that, like today's stimulus, the New Deal was a program of many parts improvised as the economy continued to sink into oblivion. We think of it as a monolith now, but that's not how it felt at the time. As Price Fishback, an economic historian at the University of Arizona, recently wrote, "It was a broad-ranging mix of spending, regulation, lending, taxation, and monetary policies that can best be described as 'See a problem and try to fix it.'" (That should sound familiar to Hank Paulson.)

In fact, one charge leveled at Roosevelt by his critics is that the uncertainty over the government's strategy discouraged business from investing. This is the argument of economist Robert Higgs and journalist Amity Shlaes, who shows in her book "The Forgotten Man: A New History of The Great Depression" how business people struggled to respond to the government's many actions.

"We know uncertainty played a role but measuring how big an effect it had is really difficult," says Fishback.

Because the New Deal was so sprawling, there are also programs that historians and economists agree were deeply effective, like establishing the Federal Deposit Insurance Corporation, or FDIC, which stopped the run on banks. The Civil Works Administration quickly employed 3.6 million people. And Fishback has done some research showing that an added dollar of public works and relief spending was tied to an increase in retail sales of 40 to 50 cents. There's also a correlation between areas of the country that received more relief spending and lower infant mortality and property crime rates.

"You don't want to say, 'Oh, don't do any of it,' because some aspects did work, but they were impeded by other aspects that led the economy to be worse," says Ramey.

As for what took so long for the unemployment figures to come back up, some economists who are sympathetic to Roosevelt point out how low the economy had fallen. "It was a broken economy on a scale we have never seen anything like," says Eric Rauchway, a history professor at the University of California, Davis and the author of "The Great Depression and the New Deal: A Short History." "To repair an economy that's that broken you have to figure it's going to take some time. That's a homely explanation but that's the best explanation I can do."

So what's the moral here?

Roosevelt and his New Deal were not as saintly or ruinous as either side claims. As usual the truth lies somewhere in the middle. The biggest thing we have in common, perhaps, is that like Roosevelt, we can only take our best guess at what will work. And hopefully, the cure this time will take hold faster.