The good, the bad and the banks 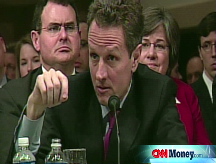 Geithner outlined the administration's plan to restart frozen credit markets and bolster the health of troubled banks. He said the economy will recover from its swoon only with the help of healthy financial institutions.

But observers said the Obama administration's plan is neither well-funded enough to recapitalize troubled banks, nor detailed enough to assure investors that the government can solve the toxic asset problem plaguing banks.

That, in part, is why stocks fell so sharply after the plan was unveiled, with the Dow Jones Industrial Average and other major indexes plunging more than 4% in mid-afternoon trading.

"This policy is just inadequate," said Chris Whalen, a managing director at financial research provider Institutional Risk Analytics. "The first quarter is just going to be grotesque for the banks - and then we're going to have to have this discussion all over again."

Whalen and others say a key shortcoming of the Geithner plan is that it lacks the funding necessary to fully recapitalize troubled banks. The Treasury has $320 billion available under the Troubled Asset Relief Program, but the administration said it won't ask Congress for additional money at the current time.

While that judgment may be astute politically - Republicans in Congress have blanched at the administration's $800 billion-plus stimulus program - it only defers the need to repair the damage at banks whose capital levels have been crushed by falling asset prices.

What's more, the four-point plan Geithner rolled out Tuesday earmarks $50 billion for foreclosure relief, $50 billion for a private-public toxic asset-removal partnership and grants as much as $100 billion to a plan to restart markets for securities backed by consumer loans.

That leaves around $120 billion in the Treasury kitty for bolstering the capital of banks - which, observers say, would barely be enough to recapitalize one troubled giant institution, let alone a roomful.

"$120 billion isn't even walking-around money in a financial crisis," said Simon Johnson, a former chief economist at the International Monetary Fund who is now senior fellow at the Peterson Institute for International Economics in Washington.

Johnson said the government should be prepared to spend at least $1 trillion to recapitalize troubled financial institutions - and that it should demand that the recipients take appropriate action in return, such as changing management, reconstituting their boards and selling assets.

The Paulson Treasury failed to exact any such concessions from banks getting taxpayer funds, Johnson said, and so far there is no sign Geithner will do so either.

"Paulson never confronted the basic issue, which is what should we be getting out of all this taxpayer investment," said Johnson. "There is a sense that the bank insiders are untouchable, and this plan doesn't change that."

No details on how to end toxic asset stalemate

The Geithner plan also failed to deliver a decisive response to the toxic asset problem. Treasury said it plans to raise as much as $500 billion through government borrowing and private capital raising to remove distressed mortgage-related assets from bank balance sheets. But it didn't say how the plan would actually work.

Investors had hoped to see at least the broad strokes of an arrangement that could break the stalemate between banks that are holding troubled mortgage-related assets and investors. Banks are clearly desperate to get the assets off their books, but not at the discounted prices that investors would want to pay considering the risks they would have to assume.

There has been in talk in recent weeks that the government could provide capital relief to banks selling at low prices, or guarantees to investors buying at higher prices, or some combination thereof.

And while regulators may still take either approach or devise some other approach, the lack of detail was viewed as a disappointment.

"It's clear there is public capital waiting in the wings," said Hal Reichwald, a partner at Los Angeles law firm Manatt Phelps & Phillips. "But this plan doesn't yet indicate how that gap will be bridged."

While elements of the plan met with approval - such as the plan to boost consumer lending through as much as $1 trillion of financing in certain credit markets - the Treasury's failure to provide a more thorough roadmap struck some observers as a bit of a letdown.

"This is more a broad statement of policy and objectives than a detailed plan," said Reichwald. "It looks like it could be 30 or 60 or 90 days before the marketplace's questions are answered in a meaningful way."

Disappointment over the Geithner plan comes in the context of a sharply declining U.S. economy, which Whalen said will result in markedly higher loan losses for banks in coming quarters.

Whalen said that while charge-offs - reflecting realized losses on loans - already match the peak levels of the 1990-1991 recession, they could easily double before this cycle bottoms out. That may leave even supposedly healthy banks like JPMorgan Chase (JPM, Fortune 500) struggling with a massive drain on capital.

As those costs mount in coming months, policymakers will be forced to reconsider how they are trying to prop up troubled big institutions. The best way to deal with big firms with hefty toxic-asset problems may be to have the Federal Deposit Insurance Corp. seize those institutions and sell their good assets to private investors.

"The temporizing is going to stop soon," Whalen said. "We need to recognize that the current policies subsidize bondholders at taxpayer expense."