Starbucks instant: Will it pass the taste test?

The coffeehouse chain says it's a game changer - but analysts are skeptical. 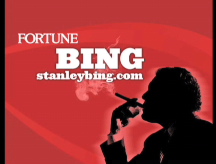 NEW YORK (Fortune) -- Starbucks CEO Howard Schultz has been hyping a major announcement for weeks, hinting only that it would involve "innovation, competition, and value."

But before he could present the idea at a Feb. 17 press junket in New York, executives close to the project spilled the beans Thursday to Advertising Age: Starbucks is going to sell instant coffee.

The new product, called Via, will be sold at Starbucks stores in packs of three for $2.95 and packs of 12 for $9.95, according to the Wall Street Journal. Customers can "brew" the coffee by emptying the granules into hot water.

Vivek Varma, senior vice president of public affairs, told employees in an e-mail that Via will "absolutely replicate the taste of Starbucks coffee," and that it is a "transformational product."

Varma also said that the $17 billion instant coffee market offered a significant opportunity for Starbucks. Kraft's (KFT, Fortune 500) Sanka and Folgers, and Nestle's Nescafe are the dominant brands of instant coffee. While the product has fallen out of favor in the U.S., it is still widely consumed in countries like Brazil and England.

Analysts have been awaiting a turnaround concept from Starbucks for more than two years, ever since the company's profits started declining due to over-expansion and increased competition from McDonald's (MCD, Fortune 500) and Dunkin Donuts. Schultz's attempts to attract buzz with new products - Vivanno smoothies, Pike Place Roast, and, more recently, breakfast foods - have mostly fallen flat.

The new instant coffee, says UBS analyst David Palmer, may be more of the same. "It's no big deal," he says. "What's different about soluble coffee is that it's equated with poor quality."

Starbucks' claim that Via tastes just as good as brewed coffee will be put to the test soon enough. Coffee guru Andrew Hetzel, who owns a coffee consultancy called Cafemakers, is skeptical.

"I have an expectation of what it will be like, and I think it will be harmful for the brand," he says. "They're really looking to generate revenue in the short term to meet the expectations of investors."

What would do a better job of revitalizing Starbucks' flagging profits? There's no shortage of ideas on Web sites such as mystarbucksidea.com or the snarkier starbucksgossip.com, a popular rumor site for tipsters and baristas. Suggestions range from free Wi-Fi to the buzzed-about 8 oz. coffee for $1, which has already gone through trial runs but has yet to be institutionalized.

Another idea floating around - and one that Schultz has firmly rejected so far - is to franchise Starbucks, or sell individual stores to private operators. Schultz announced on Feb. 3 that Starbucks would expand its Seattle's Best franchise, but he made no mention of doing the same for the flagship brand.

Nicole Regan, an analyst at Piper Jaffray, says Starbucks can accelerate a turnaround by re-franchising, or selling existing stores to employees. "Management is hesitant to re-franchise because they fear that they'd lose control of their brand," she says. "But the decision to do it with Seattle's Best signaled a change in their business strategy."

Starbucks (SBUX, Fortune 500) currently takes in about $1 million per store in revenue. Regan believes if the company re-franchised the entire Starbucks base, it could produce an additional $4.55 per share from licensing fees and repurchases.

Palmer says it would also boost Starbucks' margins, which he says were too low even when the company was performing better.

"Why not allow their partners to buy the stores and create a little bit of entrepreneurial spirit?" he asks. "It's a great idea, but it seems like management doesn't want to do it."

Despite its earnings woes, Starbucks seems wary of implementing structural changes. The company's pipeline of announcements has consisted mainly of new products and pricing strategies like bundling - and that's fine for now, says Palmer. "Starbucks should keep being Starbucks, and part of that is inspiring and surprising people," he says.

But if Schultz doesn't produce the next Frappucino soon, consistent innovation might not be enough - and his instant coffee won't be the only thing in hot water.