Skip the recession, get an MBA?

Many people think this is the perfect time to go back to school and hide out from the lousy job market. But don't say that on your application.

By Anne Fisher, contributor
Last Updated: February 25, 2009: 10:20 AM ET
Sign up for the Ask Annie e-mail newsletter
Caution: Layoffs ahead 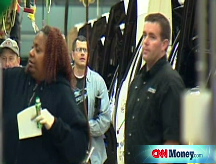 (Fortune) -- Dear Annie: I lost my job at Lehman Brothers (LEHMQ) last September and have not succeeded in finding another finance position (for obvious reasons). But finance is all I know. While I was working at the firm, I completed almost one year of course work toward an MBA. I'm thinking of trying to transfer my credits to a full-time program and finishing the degree, which just seems like a more productive use of my time than job hunting right now. Do you agree? Also, will admissions people hold it against me that I worked at a failed firm, even though I had nothing to do with the problems? -Out in the Cold

Clearly, you face lots of competition. The good news is, B-schools are unlikely to hold your previous employer's mistakes against you. "There is no stigma attached," says Dawna Clarke, director of admissions at Dartmouth's Tuck School.

"We're seeing really good applications from former investment bankers," she adds. Wall Street firms traditionally have set such stringent hiring standards, and train their people so thoroughly that, Clarke says, "we feel these applicants are in effect pre-screened for us."

Even so, beware: Your application must reflect a well-thought-out career strategy, including cogent reasons why you want an MBA, and why you have chosen the particular school you're trying to get into.

"If you're just hiding out from the dismal job market, you won't get in," says Rosemaria Martinelli, associate dean and head of admissions at the University of Chicago's B-school. "If you can't articulate why you want the degree, you're wasting our time, and your own time and money." Oh.

Keep that in mind, especially when interviewing. At New York University's Stern School, "each applicant meets with our admissions committee for 30 minutes," says executive director of MBA admissions Isser Gallogly. The school, which accepts 400 students a year, saw applications shoot up 20% in 2008.

"We're very selective," Gallogly says. "We look for people who can clearly convey their career goals and explain why Stern is the right 'fit' for them."

The written application also asks how you know you belong at Stern: "So, between that and the interview, you'd better have a good answer," Gallogly says. Writing "Because I'm tired of my fruitless job hunt" is not likely to wow anybody.

So, before you start filling out applications, think through what you want to do next, and specific ways an MBA will help you get there. And remember, MBA programs are not all alike.

"Don't rely on anybody's published ranking," says Gallogly. "You have to do enough research to make your own personal list of the best programs for you."

If possible, visit each school that interests you, take a tour, sit in on some classes, and chat with a few current students. The more you know, the more persuasive your application will be.

Then keep in mind these tips from Stacy Blackman (www.stacyblackman.com) , a Los Angeles consultant who specializes in helping people get admitted to B-school.

1. Emphasize ethics. Applicants with a Wall Street background should assure admissions committees that they personally have kept to the straight and narrow, Blackman says -- in other words, that they're "committed to more than short-term personal gain, and acting in the long-term best interests of the firm and its clients."

Be ready to give an example or two of ethical decisions you've made, perhaps when under pressure to do otherwise. You can even prompt your references to mention such moments when they write their recommendations: "Give anyone you're using as a reference a short list of bullet points, to remind them of your achievements," she says.

2. Don't overlook after-work activities. "A lot of people call me and say, 'I've been laid off, just like everybody else,' says Blackman. "But you aren't just like everybody else. Your application should mention outside activities, whether it's coaching your child's soccer team, serving on the board of a nonprofit, or hiking solo through Tibet. What you learned from those experiences will help you stand out."

3. Focus on the future. "Losing a job is such a terrible experience that people tend to dwell on it, and to think that it defines who they are," says Blackman. Instead of looking back, "focus your attention on how you're going to bounce back and what your plan is for getting past this rough spot," she suggests. "I've seen people turn this into a story that is much more impressive than if they had just stayed there in the same job."

4. Don't neglect the basics. "It sounds obvious, but be meticulous about details like making sure your application meets the school's deadline," Blackman says. "No matter how great your application is, if it's a day or two late, that reflects badly on your project-management skills - and you are, after all, applying to management school."

Readers, what do you say? Are you considering going back to school, either to switch careers or ride out the recession? If you're an MBA student or graduate, what do you think was most helpful in getting you admitted? Did going to B-school pay off for you? Have your say on the Ask Annie blog.