Meredith Whitney: A league of her own

In an exclusive interview with Fortune, the influential banking analyst talks about why it was time to go independent

Ali Velshi & the CNN Money Team take on the dismal February jobs report. How will the job market recover?
Watch a special AC360°
Friday at 11 p.m. ET
'Banks must be nationalized' 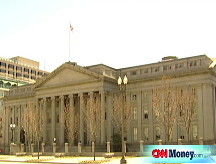 NEW YORK (Fortune) -- Meredith Whitney, the Oppenheimer & Co. banking analyst who called Wall Street's meltdown, is leaving to start her own business. And she says Fortune had a hand in her decision.

"It was the incredible women I met at the Fortune Most Powerful Women's summit that gave me the final push and confidence to go for it," says Whitney. "I am overwhelmed with support from incredibly inspiring people, many of whom I met at that conference." (Conference organizer, senior editor Pattie Sellers, shares her own thoughts about Whitney's move.)

But even before the summit, she was already laying the foundation of her new business, to be called Meredith Whitney LLC. To keep her shop truly independent, she rebuffed interested investors and put up all of the capital herself.

And despite the fact that many of Wall Street's largest investment banks have been wiped away, Whitney sees nothing fundamentally wrong with the legacy structure of the full-service investment bank. "The model got away from its roots of advising clients," she says. "I want to bring it back to its roots."

Whitney says she is not leaving Oppenheimer on bad terms. The opportunity, she says, to capitalize on the reputation she has built by calling the financial crisis was just too tempting to not seize. "The time was right," she says. "I don't want to work for anyone else anymore, and I want to broaden what I do."

In 2007, Whitney dared to say that the emperor of Citigroup had no clothes - that former CEO Chuck Prince's banking empire was severely undercapitalized. As she predicted it would, Citi (C, Fortune 500) had to raise money, slash its dividend, and oust Prince. And that was just window dressing she said: The culture at Citigroup would make it impossible for it to attack its underlying structural issues and remain a single firm. Indeed, Citigroup now plans to take itself apart.

From Citi until now, Whitney has weighed in on topics ranging from the future of the investment banks to the Troubled Asset Relief Program. If the markets are any indication, industry executives and regulators cannot get enough of her bearish opinions.

As Gus Scacco, an institutional fund manager for AG Asset Management said in Fortune's cover story on Whitney last August, "It's gotten to the point where Meredith can't opine or write anymore without moving stocks."

The firm that bears her name will be grounded in her research (her "true passion"). But it won't be just about issuing notes to clients. She eventually intends to advise companies as well. And in March, she will be on a steering committee to advise the G20 on how to respond to the credit crisis.

As head of her new firm, Whitney, who currently hosts gatherings in her home where professional women can swap ideas and hear thought leaders, plans to host a "salon series" in her offices with writers, government officials, regulators, and business luminaries. It could be a big value-add for clients who want access to bold-face names and original ideas.

"All of my career, I have been fortunate to have great access to management and to provide that to my clients," says Whitney, citing breakfasts with American Express (AXP, Fortune 500) chief executive Kenneth Chenault, dinners with Bank of America's (BAC, Fortune 500) Ken Lewis, and meetings with Jamie Dimon of JPMorgan Chase (JPM, Fortune 500) and David Viniar, CFO of Goldman Sachs (GS, Fortune 500).

Whitney says she also feels lucky to be called upon to "help find solutions to this madness." Not only is this her chance to build a business on the market participants who want her research, she says it's her opportunity to be "a direct participant in unsnarling the disruption rather than a bystander."

Meredith Whitney to banks: Deal with it
Related Articles