The chair of the Joint Economic Committee demands that the Fed name the trading partners that received funds from the insurer's massive bailout. 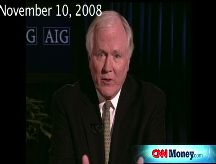 Congress asks Fed to unmask AIG trading partners -- Lawmakers want to know who's pocketing the money taxpayers have spent to prop up AIG.

Rep. Carolyn Maloney, D-N.Y., on Wednesday demanded that Federal Reserve chief Ben Bernanke provide a full accounting of the firms that have received federal funds in their dealings with AIG (AIG, Fortune 500) since last fall's brush with bankruptcy.

The letter -- which seeks to unmask the AIG trading partners that benefited from the billions of dollars the government has extended -- comes a day after Bernanke expressed frustration with the firm, which has received more than $150 billion in federal help over the past six months.

"If there is a single episode in this entire 18 months that has made me more angry, I can't think of one other than AIG," Bernanke told the Senate Budget Committee Tuesday. "This was a hedge fund, basically, that was attached to a large and stable insurance company, made huge numbers of irresponsible bets -- took huge losses. There was no regulatory oversight because there was a gap in the system."

The Fed said it received the letter and will be responding to it, but didn't go any further. Questions about the AIG morass are unlikely to go away. The Senate Banking Committee is holding a hearing Thursday morning about AIG, and Fed vice chairman Donald Kohn is scheduled to appear.

Maloney, the chair of Congress' Joint Economic Committee, said she wants information about transactions last November in which the Federal Reserve Bank of New York agreed to lend $52.5 billion to two newly formed companies for the purpose of purchasing troubled debt linked to AIG.

In one case, the New York Fed agreed to lend $22.5 billion to a company that bought residential mortgage-backed securities. The deal allowed AIG to unwind its U.S. securities lending business, which was responsible for billions of dollars in cash outflows last fall as the insurer's financial troubles deepened.

In the second case, the New York Fed lent $30 billion to a company that was to buy collateralized debt obligations on which AIG's financial products unit had written credit default swaps -- promises to guarantee the payments on the CDOs, which themselves are bundles of debt repackaged by Wall Street.

AIG's decision to write hundreds of billions of dollars of credit default swaps without hedging itself, or buying protection against the prospect that it would be forced to pay up, was among the leading contributors to the firm's near collapse last fall.

When AIG's credit ratings were downgraded last September, the insurer's trading partners demanded more collateral - cash AIG didn't have. Policymakers, scarred by the bankruptcy of brokerage firm Lehman Brothers just a day earlier, coughed up $85 billion to keep AIG going - much of which went to satisfy the trading partners' demands for more cash.

"We had no choice but to try to stabilize the system because of the implications that the failure would have had for the broad economic system," Bernanke said Tuesday. "We know that failure of major financial firms in a financial crisis can be disastrous for the economy."

But Maloney questioned whether this claim was valid. In support of her request, she appended a letter by Joseph Stiglitz, a Nobel prize-winning economist who was chief economic adviser to President Bill Clinton.

Stiglitz, who now teaches in the economics department at Columbia, said it's crucial that taxpayers be told where the money went so they can assess whether the failure to save AIG would have really imperiled the health of the financial system and the entire economy.

"If, for instance, the money went abroad, then it was unlikely that AIG's failure would have represented systemic risk to the U.S.," Stiglitz wrote. "If the money went to a large investment bank, then we can assess the impact on that bank."

The Wall Street Journal reported in December that AIG made $19 billion in payments to trading partners between its first government rescue in September and the second round of support in mid-November.

The Journal reported that Societe Generale of France and Deutsche Bank of Germany received some of those payments, as did Goldman Sachs (GS, Fortune 500) and Merrill Lynch, which is now a part of Bank of America (BAC, Fortune 500).

The government's failure to disclose details of the AIG transactions has led critics to contend that this and other bailouts are only propping up what has become a dysfunctional financial sector.

The lack of transparency has also made it reasonable for cynics to question if the bailouts were done more for the benefit of some of AIG's big trading partners, such as Goldman Sachs, that had close ties to regulators.

Former Goldman CEO Henry Paulson was the Bush administration Treasury secretary who oversaw the first half of the $700 billion Troubled Asset Relief Program.

Some think this skepticism is likely to persist until the government comes clean.

"The way out of this situation ... is not further support for the unstable and opaque counterparty relationships that are causing the 'systemic importance,'" Louisiana State finance professor Joseph Mason wrote in a recent commentary, "but revealing those relationships and unwinding the exposures."

Latest AIG band-aid is no cure

AIG rescue has a long way to go