Chrysler won't get much help from Fiat

The Detroit automaker's shortage of new products is severe, says a noted auto expert, and the Italian company doesn't have what it needs. 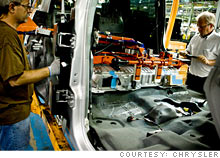 NEW YORK (Fortune) -- "I have every confidence that Chrysler will emerge from this process stronger and more competitive," President Obama said today as the automaker filed for bankruptcy and entered into an alliance with Fiat.

Bankruptcy was necessary because the vultures circling over Chrysler, hedge funds and other investors, couldn't come to an agreement, each trying to get as much of the carrion as possible.

The future of any car manufacturer is new product. According to some Chrysler managers who have "retired" in recent months, chairman Robert Nardelli focused on cash flow at the expense of product development. Most of Chrysler's recent offerings have been badge engineered: essentially old products given new nameplates. Chrysler trashed the Jeep name with the Patriot and the Compass; the Dodge name with the Caliber and Nitro; and the Chrysler name with the Sebring and Aspen.

Reportedly there is hardly anything in the pipeline, future-product teams have only half the numbers of engineers necessary, and these people are constantly being second-guessed by the finance types. This is one reason why Chrysler has the noisiest cars on the market and the cheapest-looking interiors.

While the agreement with Fiat is helpful, Chrysler doesn't get much in return. Fiat will contribute a license to use all of its intellectual property and "know how" in exchange for 20% of the equity of the reorganized Chrysler. In exchange for up to 15% in additional equity, Fiat will have to introduce a vehicle produced at a Chrysler factory in the U.S. that achieves 40 mpg, provide Chrysler with a distribution network overseas, and manufacture state-of-the-art, next generation engines at a U.S. Chrysler facility.

In Europe, Fiat is a marginal player outside of Italy. The only cars it manufactures that can get 40 mpg will have to be extensively and expensively modified to meet U.S. safety and emission standards. That just can't be done before the 2012 model year.

The Fiat 500, for example, is shorter, narrower, and taller than the Mini Cooper, dimensions that make it well suited for the narrow lanes and traffic-clogged streets common across Europe. But there is a very limited market in the U.S. for "cute," especially when many Americans still think Fiat stands for "Fix it again, Tony." And even then, it is unlikely that these cars can be sold at a profit, especially when Honda and Toyota already sell hybrids with even better mileage for as little as $19,800. Meanwhile, Chrysler dealers can only look forward to the modestly freshened 2010 Jeep Grand Cherokee and Chrysler 300.

As far as distribution overseas, that is ridiculous. Fiat adds distribution only in markets which wouldn't consider buying full-size pickups, minivans and American cars. Yes, Fiat is a leader in diesel-engine development, but that technology is primarily of use overseas, where emissions requirements are diesel-friendly.

When all is said and done, the "new" Chrysler will be owned by the United Auto Workers, which understandably will try to maximize jobs, wages, and benefits in the short term. We saw how well that worked when the unions owned 55% of United Airlines (UAUA, Fortune 500).