The silver lining for Cerberus

The failure of Chrysler is a big deal, but it leaves the private equity firm with a finance arm to blend with and strengthen its GMAC operation. 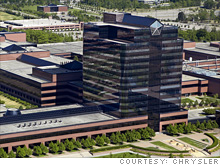 NEW YORK (Fortune) -- As Chrysler heads to bankruptcy court today in New York City, it becomes the highest profile failure for the private equity industry and its former owner Cerberus. But there is a slender silver lining for the New York money men.

As part of the automaker's decision to file for Chapter 11 bankruptcy protection, Cerberus will retain the assets of Chrysler Financial, the auto financing arm. It will work through the existing portfolio, which will hopefully generate a modest income stream as the loans come to maturity.

More importantly for Cerberus and its investors, Chrysler Financial's future business will be folded into GMAC, the auto finance company that the private equity firm bought from GM in 2006.

"GMAC and Chrysler Financial are effectively being merged," says David Whiston, an analyst who covers GM for Morningstar. "This could be a very profitable endeavor for Cerberus if they continue to have a stake in GMAC."

When Cerberus took an interest in Chrysler, there was a swirl of speculation that it was really investing in the automaker's finance arm and getting the car manufacturing business for free. The finance arm had long been the only profitable piece of their parent manufacturing company.

By having a stake in the combined GMAC and Chrysler Financial, Cerberus could have an 11% share of the auto loan market. According to data from Experian Automotive at the time of the Cerberus-Chrysler deal, that would be about twice as large as share as Ford Motor Credit, the nearest competitor, and more than any of the banks.

While it's doubtful that Cerberus inked a risky, high-profile deal just for an auto loan company, they did get the finance arm in the end and it could do a lot to shore up GMAC.

According to a GMAC press release, the unit will provide auto financing products and services to Chrysler dealers and customers, and it has a four-year agreement to offer retail finance incentives to customers with limited exclusivity. Under the agreement, GMAC will be the auto finance company for any cars made by a newly reorganized Chrysler -- no matter what form Chrysler takes once it emerges from bankruptcy protection.

"Serving as the primary source of financing for Chrysler is consistent with our strategy to diversify our automotive business," said GMAC chief executive officer Alvaro G. de Molina. "We intend to work through the operational process quickly and effectively to ensure that the appropriate level of credit is available to support the sale of Chrysler vehicles."

A Cerberus spokesman declined to comment for this story.

The acquisition of GMAC was also a gutsy foray into Detroit and another high-profile problem for Cerberus. But GMAC was solely a lending company, a business that fit well into the firm's passel of lending operations -- from stakes in international banks to small mortgage lenders.

Back then, analysts, GMAC and Cerberus executives told FORTUNE that the key to making money on GMAC would be to diversify its loan base -- in other words, offer auto loans beyond the world of GM vehicles.

But before it could execute plans to increase auto financing for other brands, GMAC and its ResCap mortgage lending arm got pummeled by the sharp decline in value and demand for residential mortgage backed securities.

It looked like the company was heading for Chapter 11, but in the eleventh hour the federal government granted it bank holding company status. This allowed GMAC to raise capital and stay alive, but reorganized the company's ownership structure. GM was to reduce its voting stake in the company to less than 10%. Cerberus's voting equity is limited to 14.9%.

However, Cerberus can still have a non-voting equity stake of up to 33% in GMAC, a company that is fighting to survive this downturn. Once the economy turns around, the mortgage arm should recover with the housing market, commercial finance should see business pick up, and the insurance business should get a lift, too, from a growing economy. Most importantly, the auto lending business will be the largest in the country.

Cerberus, named for a mythical three-headed dog, is starting to look more like a buyout shop with nine lives.

Chrysler won't get much help from Fiat