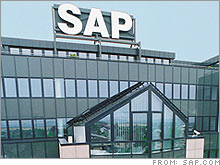 NEW YORK (Fortune) -- On May 19 Leo Apotheker will become SAP's lone CEO after sharing the title with Henning Kagermann for a year or so. He assumes the mantle at a troubling time.

The company has long dominated the $67 billion enterprise software market, but that could well be under threat by rising industry consolidation, a global recession, and SAP's botched attempt to launch a software-as-a-service business.

The company's financials have been precarious. First quarter revenues were nearly flat, with just a 3% fall to $3.2 billion, but a more prescient indicator -- sales of new software -- fell off by a third. Meanwhile rival Oracle (ORCL, Fortune 500) is busily reshaping the industry: CEO Larry Ellison last month announced a bold deal to acquire Sun Microsystems (JAVA, Fortune 500) for more than $7 billion.

(Some 9% of SAP's software was sold bundled together with Sun computers.)

With all this pressure, one might have expected Apotheker to be a bit less merry as he sat down for breakfast earlier this week with a group of journalists at New York City's Mandarin Oriental Hotel. Not so.

A salesman by background with a sharp command of languages -- he's fluent in five -- and an even sharper sense of humor, Apotheker, 55, was optimistic that "software is only at its beginning, not at its end." And that spells nothing but opportunity for SAP (SAP).

But for company to jumpstart its growth, Apotheker must find new ways to attract customers and sign up more licenses and he must hammer out a business model for Business ByDesign, the software-as-a-service product aimed at small and medium-size companies. (In software-as-a-service implementations, software is housed remotely and delivered over networks rather than installed on servers at customers' facilities.) And along the way, he can't get distracted by the daily rumors that companies from Microsoft (MSFT, Fortune 500) to IBM (IBM, Fortune 500) might be putting together acquisition offers. That's a tall order.

Apotheker hopes to appeal to SAP's 86,000 existing customers by helping them more easily decode the volumes of data they've collected about their business. Launched May 11, a new product called SAP BusinessObjects Explorer will offer real-time analytics for "any quantity of data" with an in-memory database, a sophisticated search engine and an interface evocative of iTunes.

"Even SAP can be cool," Apotheker said with a playful nod to the complexity of his industry. And of course, if data is decodable to more than just the Ph.D.s, SAPs customers may license the software for even more of their employees.

But SAP's real challenge will be to forge a new computing model that follows the industry's evolution. Historically, enterprise software companies have made the bulk of their profits off of the consulting and maintenance fees they charge their customers.

But as broadband becomes ubiquitous and with new models available from cheeky startups like NetSuite (N) and Salesforce.com (CRM), companies are increasingly experimenting with buying their software over the web, paying a monthly fee to a software company that actually runs it for them.

It has has been among the slowest of the large software companies to venture into this market, and its flagship product, Business ByDesign, has yet to get off the ground. Back in 2007, the company announced a large investment in the project, saying it represented a $1 billion opportunity and that by 2010 the business would add about 10,000 customers a year and sport margins that bested margins from the company's traditional business. Since that time, however, SAP has slashed its investment in the product and tempered its revenue goals.

When asked about Business ByDesign, Apotheker removed his glasses and rubbed his palms together. The product has just 80 customers testing it out at the moment, according to Apotheker, and he was reluctant to say when it would be more widely available, explaining that SAP had to flesh out the most viable business model before it launched and it was worth waiting to get the model right.

"So do you have a viable business model?" one journalist asked.

"I'm not in the business of dead business models," he replied curtly.

Even as we dined, rumors were being floated that Microsoft, having sold a $3.75 billion debt issue in its entrance into the U.S. corporate bond market, was preparing to make a bid for the company. Apotheker had no comment and Ballmer later denied it to reporters, but there is much speculation over whether one of the large software or telecom companies will make an acquisition offer.

"Software is where the auto industry was in the 1970s," says Ray Wang, an analyst with Forrester Research. "It's a struggle for who can get the largest share of the IT wallet." It's this struggle that may ultimately pose Apotheker's greatest challenge, and make way for his potential legacy.