As the first TALF-backed deals for Ford, Honda and Harley's debt hit the market, professional investors see an opportunity to make a killing. 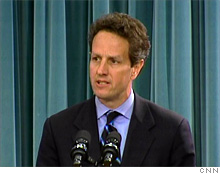 NEW YORK (Fortune) -- Imagine if you were not really in the market for a house but the government came along and said that it would finance 94% of a home's purchase price with a mortgage rate of less than 3%. Still not interested? Wait, Uncle Sam has some additional sweeteners: if you do the deal and buy the house for only 6% down, you also get the equivalent of rental income every month to the tune of at least an annualized yield of 10% of the purchase price.

But wait there's still more: if, say, after two years, you decide you don't want the house any longer, you can just walk away from it. No need to pay the balance of the mortgage (it won't affect your credit rating), and you can keep the rental income received to date.

That's essentially the deal that Treasury Secretary Timothy Geithner has offered qualified professional investors who participate in the so-called TALF (Term Asset-Backed Securities Loan Facility). Two months into the program as the first TALF- backed deals hit the market, you can see why the likes of hedge fund Fortress Investment Group are drooling over it. "I'm a big believer in the impact that TALF can and should have," Fortress CEO Wes Edens said on a May 6 investor call, adding that he expects that Fortress will be "a big participant" in the TALF program "three to six months from now."

The first few TALF deals -- one for Ford Credit (the financing arm of the automaker), another for American Honda Receivables Corp., a third for the student loan company Sallie Mae and a fourth for motorcycle icon Harley Davidson -- shed some light on our tax dollars at work.

"I've had accounts that dropped everything they were doing to take a look at this TALF financing," one Wall Street trader explained. "It was like nothing they had ever seen. It beats any financing that the private sector could ever come up with. I almost want to say it is irresponsible." For instance, Prudential Financial, Inc. (PRU, Fortune 500), the large insurer and investment manager, borrowed $786 million from the TALF as of March 31 and put up only $50 million to do so, some 6.4% of the deals.

In case you're not totally conversant with the alphabet soup of financial remedies emanating from the Obama Administration, here's a brief refresher: Geithner and the Federal Reserve announced the launch of the TALF in March. The TALF is a $200 billion (on its way to $1 trillion) non-recourse lending program to private investors as a way to encourage them to buy newly underwritten securities backed by auto loans, credit-card receivables and student loans, among other asset classes. (The TALF program is set to extend, in June, to the issue of new commercial real-estate mortgage-backed securities.)

These securitizations were once upon a time a key component of the so-called "shadow" financing system that helped raise trillions of dollars of capital worldwide. Of course, the securitization and sale of mortgage-backed securities was one of the leading causes of the current financial crisis as the people who took out the underlying mortgages started to default upon them in unexpected numbers. Still, Geithner has determined, correctly, that getting these securities circulating again is crucial to restoring the health of the credit markets. The Treasury designed the program, but it is the Federal Reserve that provides the government's share of the capital. "The increase in the TALF is expected to help stimulate both new issuances and the removal of assets from bank balance sheets," Credit Suisse wrote to its shareholders on May 8.

Investors interested in borrowing from the TALF program have to be approved by the Treasury and then, once approved, have to set up an account with a broker-dealer that is subject to a variety of the usual terms and conditions. The investor then must indicate a desire to buy, say, at least $10 million of one of the dozen or so deals, worth an aggregate of around $25 billion, which have come to market since the TALF program was set up in March. An early test for TALF was a May 5, $1.5 billion car-receivables securitization for American Honda Receivables Corp. and underwritten by JPMorgan Securities (JPM, Fortune 500) and BNP Paribas Securities. Investor demand for the deals so far is said by one trader to be "strong" and the deals are selling well. The real market test, though, of TALF will come when the first deals involving CMBS (Commercial Mortgage Backed Securities) start coming to market in the next few months.

The way the TALF works in practice is this: The amount of equity an investor has to put up, or the "haircut" as the TALF documents call it, depends upon the assets involved, the term of the loan or lease of the underlying asset (say, a car) and the credit quality of the underlying borrower. A loan to buy a three-year security backed by a group of credit-card receivables from high-quality borrowers would require an investor to put up 6% of the capital -- a 6% "haircut" -- and then can borrow the rest from the TALF through his brokerage account. To buy a two-year high-quality credit-card receivable security, a borrower would put up 5% of the face amount of the securities purchased. Auto receivables require as 12% equity investment for a three-year security. Small business loans require 5% down. Student loans require 10% down for a three-year deal.

An investor interested in a $10 million slice of three-year credit card receivable would put up 6% of the money -- $600,000 -- and borrow the balance of $9.4 million from the TALF at a rate of three-year LIBOR plus 100 basis points (Attention K-Mart shoppers, that's 2.85% at this moment.) Depending on all sorts of assumptions, the yields on these investments are said to be in the 11% to 15% range, especially attractive since the TALF loans are non-recourse to the borrowers -- you can just walk away and lose only your underlying equity investment and the collateral but you are not held responsible for the unpaid portion of the TALF loan itself.

In addition, the TALF loan is not marked-to-market so if the underlying collateral deteriorates in value, the investor is not required to put up more equity. What's more as the car payments or credit-card payments on the underlying security are made, the payments are distributed to the government and the investor on equal footing -- that means the investor starts getting paid back at the same time as the government even though the government is the senior secured creditor and even though an investor has put up only a small fraction of the original money. One private equity investor, who would not normally have looked at investing in such a deal but did, called this particular aspect of the TALF "shockingly good."

But who will the TALF deals be shockingly good for -- the players on the field or those of us in the bleachers? If what Geithner calls "our lending facility with the Fed" does its job and jumpstarts the credit markets then the extraordinary concessions the government has made to attract private capital may have been worth it.

William Cohan is the author of House of Cards: A Tale of Hubris and Wretched Excess on Wall Street, published this month by Doubleday Books, a division of Random House, Inc.

Geithner to rein in derivatives