Atheros hopes for a bounce

The wireless chipmaker - No. 19 on our Fastest-Growing Companies list - sets its sights on making inroads in mobile devices. 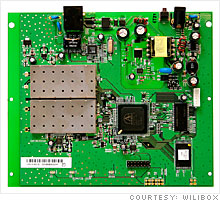 (Fortune Magazine) -- The PC industry has been taking it on the chin lately, so it's no surprise that wireless chipmaker Atheros should be suffering too. The bulk of Atheros's business comes from selling chips that enable Wi-Fi in personal computers and PC-related devices like routers. And business has been soft in all of those areas, as wallets around the world remain resolutely shut.

Since the recession took hold, Atheros (ATHR) has seen sales fall and its stock plummet almost 50% in the past 12 months, leaving it with a market cap just under $1 billion. It's been a dramatic departure for the company, which returned 55% annually from mid-2005 through mid-2008, and held the No. 19 spot on Fortune's 2008 Fastest-Growing Companies list.

Still, like its much larger competitor and neighbor Intel (INTC, Fortune 500), the Santa Clara--based company is signaling that the worst may be over. Atheros CEO Craig Barratt (not to be confused with Intel chairman Craig Barrett) projects that revenue will increase by 15% to 20% in the second quarter as the computer and networking-gear manufacturers that it serves order more chips.

And even if a recovery doesn't occur as soon as Barratt is suggesting, Atheros sits on absolutely solid financial footing, which will help it ride out any further softness in the market. As of March 31, the company had zero debt and almost $5 a share in cash. That cash hoard, combined with the potential for a big jump in share price if customers come back in full force, makes Atheros the top pick for Oppenheimer analyst Daniel Morris, who has an outperform rating on the stock and a target price of $21.

That's the near-term picture. Long term, Atheros is looking beyond the slowing PC market and focusing on devices that take computing into your car, your living room, and your pocket. For example, Atheros recently demonstrated Bluetooth 3.0, which it hopes will win a place inside the latest generation of mobile Internet-connected gadgets. The souped-up wireless radio combines Bluetooth's ability to automatically recognize and pair wireless devices with the high-speed data streams of Wi-Fi.

Technologies like Bluetooth 3.0 stand a chance of opening the door for Atheros to get its chips inside all kinds of mobile devices. So next time the PC market takes a big hit, Atheros may not feel the pain.