What would Sotomayor mean for business?

Supreme Court nominee has broad experience and a moderate record. 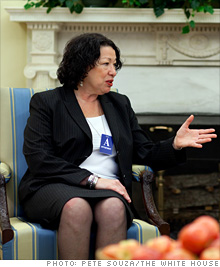 NEW YORK (Fortune) -- If there had been a secret-ballot vote among appellate lawyers who argue business cases, it is most unlikely that Judge Sonia Sotomayor would have been selected as the one to replace Justice David Souter on the U.S. Supreme Court - even from among the reported finalists on President Obama's short-list.

Some such advocates have recounted on background (to me, as well as to other reporters or to the Almanac of the Federal Judiciary 2009) having been manhandled a bit at oral argument by Sotomayor's sharp and, sometimes, sarcastic, and even bullying questions. In addition, her academic credentials - though remarkable by the standards of most mortals - have not been as relentlessly burnished to the high, Ivory Tower gloss of, say, former Harvard Law School dean Elena Kagan or federal appeals judge Diane Wood, a former University of Chicago law school professor.

Still, the business community could have done worse. "I think she is really a moderate on business issues," says Lauren Goldman, a partner in Mayer Brown's appellate practice unit who has been studying Sotomayor's record as both a federal district judge in Manhattan and appellate judge of the U.S. Court of Appeals for the Second Circuit. "I don't think there's anything to cause [business] people to be alarmed or concerned," she says.

As he had promised to do, President Obama selected a judge with enormous breadth of life and career experience - experience that dwarfs not only that of Wood or Kagan but, indeed, that of any of the justices on the current Court. In addition to her extraordinary life story - raised poor by a widowed Puerto Rican mother in the Bronx; graduating summa cum laude at Princeton; graduating from Yale Law School as an editor of the law journal - Sotomayor has served as a state prosecutor in Manhattan (five years); as a partner in an international business law boutique, where she handled intellectual property cases, including trademark and counterfeiting matters, and international litigation and arbitration of commercial and commodity export trading cases (eight years); a federal district judge (six years); and a federal appellate judge (10 years).

Some litigators believe that, no matter what the specific issue may be before the court, a range of experience is a better background for a judge to have than a lifetime spent seeing the world from a particular, homogeneous perspective - that of, say, a prosecutor, or an academic, or appellate judge.

"All have great credentials," says Diana Parker, a New York lawyer who studied the records of all of the judges reportedly being considered for the nomination on behalf of a group of women litigators she belongs to. "But in terms of breadth of experience she was clearly the one."

"I can't say, 'Business community: Drink champagne tonight,' " says Parker, but in broad terms she thinks Sotomayor is a wise selection. "They can be the smartest academic in the world," she continues, "but it's not what I wanted. It's not what any litigator wanted."

For the business community, the starting point in any analysis has to be the judge Sotomayor has been selected to replace, Justice Souter, who was by no means a particularly pro-business judge to begin with. So, if Judge Sotomayor were to prove anti-business, the business community would only have something to lose in those relatively few categories of cases in which Justice Souter would have been expected to vote on the pro-business side. (For a prior analysis of Justice Souter's positions on business issues, see here.)

The key such areas - those in which Justice Souter tended to vote as an ally to business - are those in which courts were being asked to rein in civil litigation abuses, including allegedly excessive punitive damage awards imposed by runaway juries and lax pleading rules that were said to allow plaintiffs attorneys to extort settlements from defendants in nonmeritorious cases because the settlement would be much cheaper than the cost of defending the case.

With respect to reining in punitive damage awards - of particular significance because Souter was a part of a narrow majority of justices in favor of doing so - it's impossible to say what a Justice Sotomayor would do. According to Goldman, Sotomayor has participated in panels that have upheld some fairly large punitive damage awards, including a $1 billion award in 2007, but in each such instance the award was not a large multiple of the compensatory damage award in the case - the sort of situation that has been held in the past to rise to the level of a constitutional transgression.

As for other cases pertinent to reining in potential litigation abuse, Sotomayor's most disturbing past holding is her 2005 opinion in Dabit v. Merrill Lynch, which was later overturned by the U.S. Supreme Court in 2006 by an 8-0 margin. The issue there was whether securities class-action lawyers had conjured a legitimate way to do an end-run around certain federal legislation, designed to stop abusive practices in federal securities cases, by shrewdly crafting their complaints to raise only state-law claims. Judge Sotomayor would have allowed the suits, but the unanimous Supreme Court (Justice Samuel Alito did not participate) reversed.

Nevertheless, Mayer Brown's Goldman argues that the business community should not read too much into Sotomayor's ruling in Dabit. They can take heart, she contends, from Judge Sotomayor's participation on two other panels - though not as the opinion writer - that reined in attempts by plaintiffs lawyers to bring innovative and unwieldy class-actions. The most important of these was Miles v. Merrill Lynch, which is also known as In re Initial Public Offering Securities Litigation. That case involved 310 class actions, each of which was itself a consolidation of hundreds of smaller class actions, all arising from allegations that securities brokers and issuers during the dot-com bubble years had secretly allocated participations in IPOs to investors who agreed, among other things, to bid up the stock in the after-market. In 2006 and again in 2007, Sotomayor joined in opinions written by Judge Jon O. Newman that decertified all these classes, and that articulated a higher standard for plaintiffs to meet in order to obtain class certification than certain other circuit courts of appeal have required.

In at least one important category of business cases, involving the preemption doctrine - cases in which businesses argue that a federal regulatory scheme trumps an overlapping state-law regulatory scheme and, therefore, that the businesses need not comply with the state-law regulations - Justice Sotomayor might actually offer a more receptive ear to business interests than Justice Souter did.

But Mayer Brown's Goldman says that, according to her research, Judge Sotomayor has been a moderate in preemption cases, finding preemption in about half the cases in which she was asked to do so. (She did so, for instance, in a 2002 race discrimination case against American Airlines (AMR, Fortune 500), where the plaintiffs' claims - that they had been bumped off an overcrowded flight on the basis of race - were found to have been preempted by an international treaty governing claims against air carriers.)

Finally, there will be categories of cases in which business has traditionally failed to win Justice Souter's vote, and in which it will now, most likely, fail to win that of a Justice Sotomayor either. Souter tended to vote against business in environmental or employment discrimination cases, for instance, and Sotomayor seems to have similar predilections. In 2007, for instance, Sotomayor wrote an opinion in Riverkeeper v. Environmental Protection Agency, in which she sided with environmentalists in a Clean Water Act case. Her ruling was overturned by the Supreme Court this past April, but with three liberal justices, including Souter, dissenting (i.e., agreeing with Sotomayor).

What will Souter's retirement mean for business?