How to avoid the 'death tax'

The smart use of gifts and trusts can help you pass on more of your money to your heirs. 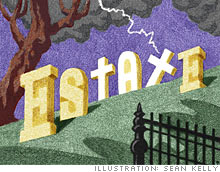 (Fortune Magazine) -- If 84-year-old Bob Sievers of Pacific Palisades, Calif., had his way, Congress would scrap the estate tax altogether when it considers an Obama administration proposal on the future of the controversial tax. As co-owner of a lumber business for 40 years, Sievers built his wealth from scratch and paid taxes on his earnings every step of the way.

"What we have, we earned, and we paid tax on everything we earned, and we don't want to be taxed again when we die," says Sievers emphatically. Sievers, along with his wife, Carol, first set up an estate plan in 1982, and they have updated it numerous times over the years to reflect changes in the value of their nest egg and the expansion of their family, which now includes five children, 11 grandchildren, and four great-grandchildren. They quickly discovered they would need to establish an intricate network of trusts and other tools if they hoped to pass along the bulk of their hard-earned assets to their children without Uncle Sam taking a sizable chunk in taxes.

The estate tax - known as the "death tax" among its detractors - will be a hot topic in coming months. The tax-cut package enacted in 2001 called for it to be phased out over 10 years. This year, for example, only the portion of estates that exceeds $3.5 million for an individual and $7 million for a couple is subject to tax; the rate is 45%. This exemption is far bigger than in 2008, when the tax applied to estates valued above $2 million. But the 2001 tax cuts expire after next year. If Congress doesn't act, the estate tax will disappear in 2010 but will return in 2011 at the pre-2001 level of $1 million with a tax rate of 55%.

President Obama has said that he wants to keep the estate tax where it is today: at 45% on amounts above $7 million (for couples). Estate-planning experts speculate Congress will pass a new law before year's end to prevent 2010 from being a tax-free year. "They can't suffer the revenue loss" from removing the tax for a year, says Jay Adkisson, an attorney and founding partner at Riser Adkisson LLP. (One thing that's not expected to change: A spouse can inherit an unlimited amount tax-free through the marital deduction.)

Regardless of what happens in Washington, creating an estate plan and keeping it updated is critical. A smart plan uses tools, ranging from life insurance to trusts, to lower or even eliminate the estate tax and to prevent strife and bitter feuds among beneficiaries after a death. "Poor planning can destroy a family," says Les Kotzer, an attorney who is the author of "Where There's an Inheritance - Stories From Inside the World of Two Wills Lawyers." If no plan is in place or if terms are not explicitly spelled out, chaos can ensue, he says. Kotzer recalls a man who made a handwritten will leaving "all his personal stuff" to a son. A bitter court battle erupted as a daughter claimed "stuff" meant his power tools and personal possessions, not gold and diamond rings that their mother had owned. The son vowed to fight her to the gritty end, claiming he hoped his sister's legal fees would cost more than the jewelry was worth. Here are some tools you and your lawyer or estate planner can use to avoid such disasters.

The joy of giving. Let's start with a couple of simple techniques. For example, giving away money during your lifetime can reduce the value of your taxable estate. Here are the basics: You can give any number of individuals up to $13,000 each year without any tax consequences. Amounts above $13,000 are subject to the gift tax, but you also have a tax credit that allows you to give up to $1 million during your lifetime without incurring taxes. And there is no limit on how much you can give tax-free when you pay someone's higher-education or medical expenses directly.

As far as how you make those gifts, you can simply hand the money over to the recipient, but you have other choices. One popular method is a so-called Crummey trust, often used for a child, which allows you to impose conditions on how and when the beneficiary can get access to the money.

Life insurance. If you're planning to leave property, a business, or other noncash assets to your heirs, life insurance can be a lifesaver. If you purchase a policy that will cover the taxes on your estate, your heirs won't be faced with having to sell assets to pay the taxes. "Mom and Dad give money to the kids to take insurance out on their lives," says attorney Jeffrey Condon, author of "The Living Trust Advisor." "When they die, the insurance company will write a check tax-free to the kids." You can also set up a life-insurance trust to be the beneficiary of the policy: That way, the death benefits won't be taxed as part of the estate.

Geoffrey VanderPal, of Elite Financial Planning Group of America in Las Vegas, recalls one client who had a $40 million financial services business that he wanted to pass on to his son. The client ignored suggestions that he set up an estate plan with a life insurance trust to cover the taxes on the estate. When the client died, the son couldn't afford the $18 million in taxes and had to liquidate the business.

Put faith in trusts. Trusts are one of the most popular tools for reducing estate taxes. But they are expensive - setting one up can cost anywhere from $500 to $20,000, with most falling between $2,000 and $5,000 - and complicated. We're not talking about living trusts, by the way. Living trusts can keep your estate out of probate court but generally do not help avoid estate taxes. To do that, you need to set up an irrevocable trust. One popular form is the grantor-retained annuity trust, or GRAT. With a GRAT, you transfer assets into a trust that has a set life, typically five years. You receive annual payments from the trust, based on an interest rate set by the IRS. The payments are calculated so that the trust "zeroes out" by the end of the term, which means you will have gotten back your original assets plus the IRS rate of interest on them. Any appreciation above that interest rate goes tax-free to the beneficiaries of the trust, such as children and grandchildren.

Since the current IRS-designated rate is low - only 2.4% - this trust is an attractive place right now to put battered stocks, property, or other assets that are expected to see big gains in the next few years. "We've seen an explosion since last December in the number of individuals who are making and thinking about doing GRATs," says Gail Cohen, head of global wealth management at Fiduciary Trust Co. "People are thinking they're going to see jumps of 25%, 30%, or 50% in securities in the next two years because the values had gone down so low."

You can also use trusts to give money to your favorite causes. For example, with a charitable lead trust, or CLT, the charity gets annual distributions, with the balance passing to your heirs at the end of the term. In a charitable remainder trust, or CRT, the donor gets annual distributions from the trust, with the balance passing to the charity when the term ends.

In addition to trusts, limited partnerships and limited liability companies can play a role in your estate plan. Under IRS rules, you are allowed to transfer real estate or other assets into a partnership at a discount to market value, typically 20% to 30%. Then you can give shares in the limited partnership to your children. This maneuver effectively lowers the value of the asset for tax purposes.

Stay-up-to-date. Once you have an estate plan, update it regularly to reflect changes in the value of the assets, revised tax laws, a new marriage, or the birth of children. "People really need to revisit their estate plans today in light of the shrinking values of their homes and their businesses," says Cohen.

And don't procrastinate. When actor Heath Ledger died in January 2008, his outdated will did not include his infant daughter, Matilda Rose, and a family battle ensued over his assets. "Nobody wants to talk about death, and nobody wants to talk about money," says Holly Isdale, managing director of Bessemer Trust. "It's like planning a huge party that you're never going to attend." But you have to make sure you've set up your plan properly, she says: "You're not going to be around to fix it if it goes wrong."

A wave of homebuilder consolidation?

A fund that hedges against inflation