Accidental Billionaires's author Ben Mezrich explains how he put together the tawdry tale that has Silicon Valley buzzing. 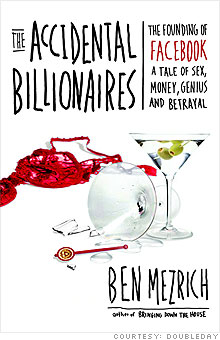 NEW YORK (Fortune) -- Best-selling author Ben Mezrich is the first to concede he doesn't know exactly what happened between Mark Zuckerberg and the Victoria's Secret model at that San Francisco club in the summer of 2005. He tells the story just as sources reported it to him: a touch on the leg. A grasp of the hand. The pair leaving the club. That's it. Any inference from there is your own.

But man, is there ever inference. In "Accidental Billionaires: The Founding of Facebook: A Tale of Sex, Money, Genius and Betrayal," due out July 14 from Doubleday, Mezrich spins a fast-paced tale of intrigue and suspicion that follows Facebook's young founder on his ruthless rise to prominence in Silicon Valley. The 262-page narrative portrays Mark Zuckerberg as a hard-hearted genius with a fetish for Asian women who is not above stealing ideas and turning on his friends in his quest to create the dominant social network. "West Wing" creator Aaron Sorkin has already agreed to write the screenplay, and Daily Variety recently reported that David Fincher ("Fight Club") may direct the movie.

Mezrich, who was criticized for making up characters and scenes in his best-selling book "Bringing Down the House," uses a lengthy author's note to broadcast his reporting methodology. He describes his work as a "dramatic narrative account," explaining that he reconstructed dialogue and even, to the extent that it moved the story forward, entire scenes. Some would call this fiction. But Doubleday has bravely labeled it nonfiction. Or as Mezrich told Fortune.com, "There are certain places in the book where I'm sort of doing a legitimate speculation." He calls his work "a best guess."

Of course, Mezrich's primary source for a good deal of the material is Eduardo Saverin, a classmate at Harvard College of Facebook founder Mark Zuckerberg. Saverin used earnings from smart investments he'd made as an undergraduate to help start the site, then called TheFacebook.com.

Long before Saverin connected with Mezrich, however, he'd become estranged from Zuckerberg. After Saverin was pushed out of the company, Saverin and Zuckerberg lobbed lawsuits at each other liberally from April 2005 until last August when the suits were dismissed. Over the winter Saverin's name was added to the Facebook web site as one of the cofounders. At about that time Saverin also stopped talking to Mezrich. Saverin didn't respond to Fortune.com's attempts to contact him.

Mezrich remembers meeting Saverin by chance. "It was about 2 a.m. in the morning when I got an email out of the blue to my web site, which is essentially a fan site. This kid wrote an email -- I'm a Harvard senior and I have a really fantastic story for you' -- which of course you hear all the time. But the kid said, 'You know, I've been best friends with these people who founded Facebook, and I want to tell you this story.' I wasn't looking for this story, but I went and met this kid for a drink. So I show up at this bar, Bar 10 at the Westin [hotel in Boston], and the kid shows up with Eduardo Saverin. He wouldn't tell me who Eduardo was at first. It was all kind of secretive. Then Eduardo began to tell me this whole story, and he was clearly upset."

Mezrich is quick to add that "Accidental Billionaires" is based on many other interviews and documents. He got lucky, of course, when thousands of pages of court documentation surfaced after Cameron and Tyler Winklevoss, also former classmates of the Facebook founder, sued Zuckerberg claiming he stole their idea. (This suit settled and the twins reportedly received $65 million.)

One person Mezrich never spoke with is Mark Zuckerberg. Says Mezrich, "There was always this 'Mark might talk to you, Mark might talk to you' thing going on, but in the end Mark decided not to talk to me, and he made it pretty clear he didn't want any of the people he's involved with talking to me." In a deft story-telling move, Mezrich turned this deficit in his favor, playing up the mystery behind Zuckerberg's personality.

Sex and Drugs and Koalas

One of the book's more picaresque characters is Silicon Valley bad boy Sean Parker, the cofounder of music file-sharing service Napster and one of Zuckerberg's boyhood heroes, per Mezrich. Mezrich describes Parker and Zuckerberg's first meeting in a Manhattan restaurant: "the look on Mark's face, the sudden flush in his cheeks and the brightness in his eyes. Pure idol worship." Mezrich wouldn't say whether he interviewed Parker, but Parker is included in many of the book's more salacious moments -- parties where drugs feature prominently. Parker did not respond to requests for comment.

Often the details Mezrich makes up are juicier than the facts that inspired the scenes. For example, Mezrich believes Zuckerberg had to break into a Harvard residence house to retrieve student data to launch an early forerunner of Facebook. At the start of a chapter, he writes: "He might have gotten what he needed in other ways, we certainly don't know for sure every detail; but we can imagine how it might have gone down..." Cut to the middle of the night where a kid "who just liked to prove what he could do, how much smarter he was than everybody else" crept into a residence hall, then ducked behind a sofa while two coeds engage in a sexual act.

So far, even some of the details labeled "fact" in the book have been disputed. Soon after they arrive in Silicon Valley, Zuckerberg and friends find themselves eating koala meat on a yacht belonging to a Sun Microsystems (SUNW) founder. Yup, the cuddly marsupial. When excerpts from the book's proposal appeared on Gawker earlier this year, that anecdote was called into question.

"It was a story told to me by Eduardo, and I did my best to look into it, and I believe truly that it happened, " says Mezrich. "I believe they ate koala on the yacht of one of the founders of Sun Microsystems. It wasn't the CEO as Gawker reported. And the funniest email I got after that proposal [leaked], is that the one thing Eduardo wanted to make sure of is [the fact that] it wasn't the CEO it was the COO. That was his main problem with my proposal."

Facebook spokesman Elliot Schrage thinks the book is so inaccurate readers will not take it as fact. "Ben Mezrich clearly aspires to be the Jackie Collins or Danielle Steele of Silicon Valley. In fact his own publisher put it best. 'The book isn't reportage. It's big juicy fun,' he says, quoting Doubleday publicist Todd Doughty from a June 24 New York Times blog post. "We particularly agree with the first part of that and think any readers will concur."

In the end, "Accidental Billionaires" is not that damning to Zuckerberg's character. And it's not that true. But much as the story may be more fiction than fact, it may well take its place in American culture as Facebook's definitive founding myth, particularly if Hollywood gives it the full treatment.

Yes, MySpace can be saved