Steroids, sociopaths, and other fascinating secrets about baseball's Hall of Fame. 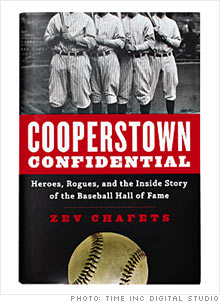 (Fortune Magazine) -- I can give you three reasons I shouldn't be reviewing Cooperstown Confidential, by Zev Chafets (Bloomsbury). First, Chafets and I discussed his book a few years ago while he was doing research. Second, he says some nice things about me in a footnote. And third, I'm in the grip of a raging case of envy.

But please -- let's try to look past all this. Cooperstown Confidential brims with excellent reporting, cogent analysis, and delicious dish. At times it's awfully funny (one widely respected player was married, writes Chafets, "but he wasn't a fanatic about it"). And it demonstrates that the Hall of Fame is more hollow than hallowed.

We're not talking about the fine museum that anchors Main Street in lovely little Cooperstown, N.Y. This book is about the roster of immortals, and how it has been assembled. Sure, numbers count -- RBIs, ERAs, etc. -- but Chafets demonstrates that cronyism, prejudice, and financial self-interest play a huge part as well.

He addresses a variety of factors that have influenced the people who make (and unmake and remake and unremake) the rules. In 2009, in the looming shadows cast by Clemens and Bonds, the rule that matters most is No. 5, the one about character. It's been used to keep out witnesses to gambling (Joe Jackson) and gamblers themselves (Pete Rose) but has somehow not been applied to cheaters (Gaylord Perry), racists (Cap Anson), sociopaths (Lefty Grove), and cheating racist sociopaths (Ty Cobb). Nor to a quantity of drunks, drug users, and other lowlifes that could fill the reservation book at Hazelden.

About those druggies: Most people who follow baseball closely suspect that a large share of Hall members from the '70s and '80s got their games up with the help of amphetamines. But Chafets has turned up evidence that steroids go back as far as the 1950s.

His source is The Long Season, pitcher-writer Jim Brosnan's 1959 classic about life in the big leagues. No one besides Chafets appears to have read it since the steroid scandal broke. Otherwise, we'd all be familiar with Brosnan's matter-of-fact description of the Cardinals' trainer handing out uppers (for energy), downers (for a pitcher concerned about his control), and a potent glucocorticosteroid called Decadron. From Brosnan's tone, it's obvious it was an everyday practice.

Cooperstown Confidential does include a few factual stumbles. Worse -- as far as this Cubs fan is concerned -- the author's conviction that Steve Garvey should enter the Hall before Andre Dawson is a capital offense. But I'll let him get away with those missteps. Zev Chafets hits it out of the park, and he doesn't cheat.

7 of the world's finest yachts