New iPhone no threat to the Flip camcorder 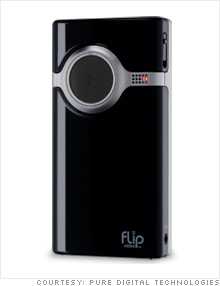 No power outlet? No problem

NEW YORK (Fortune) -- With the launch of the Flip video camera in May 2007, the camcorder market has never been the same. Flip brought video creation and sharing to the masses, which meant even more footage of cats riding skateboards. (We can't thank them enough for that.)

Consumers embraced the convenience, simplicity, portability, and affordability of Flip's "point and shoot" video camera. It has few buttons, records video on an internal chip, and uploads footage to a computer through a USB key that "flips" out of the camera. Software loaded on the device transfers clips seamlessly to the Web. Models start at $150.

Soon the device was grabbing market share from Sony (SNE) and JVC -- more than two million of the cameras have been sold -- and earlier this year networking giant Cisco (CSCO, Fortune 500) snapped up Flip maker Pure Digital for $590 million.

But there's a new rival on the scene: Apple iPhone 3GS, introduced in early June, boasts a video capture function. And some technophiles are asking if Flip's days as the No. 1 pocket video recorder are numbered.

There's no question the iPhone's video function is one of the coolest new features on the phone. It absolutely competes with the Flip, and in some ways is actually superior.

Unlike Flip, you can edit clips right on the iPhone by moving the start and stop points. You can also share video immediately via wireless email on the iPhone 3GS. Flip can't do that. And while Flip does have a leg up with its high definition models, the standard definition iPhone is wired for HD. All it needs is a software upgrade (Apple (AAPL, Fortune 500) had to leave something for the next version of the iPhone).

The iPhone also has a sleeker design and a larger screen than Flip, and performs a wide range of functions. The price tag reflects that, ranging from $199 to $299 for the phone plus a two-year contract with AT&T (T, Fortune 500) easily coming in at $70 a month. At $230, the MinoHD is the Flip's most expensive model.

The iPhone can do almost everything the Flip can, and in some cases, even more. In spite of this, tech and camcorder industry analysts don't believe it's a threat. Ironically, they say that many consumers are attracted to the Flip precisely because it lacks the iPhone's panoply of functions and add-ons.

"Much of the strength of the Flip comes from its simplicity and dedicated purpose," explains Ross Rubin of market researcher NPD group. While Rubin acknowledges the advantages the iPhone's video capture has over Flip, he argues that "these may not be as important or could be confusing to many Flip users that eschew sophistication in their devices."

Despite the seeming trend of convergence toward a single multipurpose device, analysts claim many consumers still prefer electronics dedicated to one task. "The notion of the hybrid cannibal device always pops up," says Chris Chute of research firm IDC. "The consumer doesn't say to themselves, 'I'm going to buy one device that does everything okay.'"

Indeed, the entrance of camera phones into the market five years ago sparked speculation that digital cameras would disappear because everyone would be printing photos from their phones. That didn't happen. And the Flip has held up in a market where digital cameras and other devices capture video, Rubin notes. "The iPhone is simply among the latest devices to offer video recording among its features."

The iPhone doesn't have all the edge either. To start, Flip is accessible through many more channels than the iPhone 3GS. Flip's MinoHD currently holds the No. 10 spot on Amazon's list of electronics bestsellers. You can't even buy the iPhone 3GS on Amazon.

As for the design, while the Flip might not be as sleek as the iPhone, it's nearly the same size and the Mino model is lighter in weight. The Flip is also more affordable and doesn't require a contract commitment, making it an easier sell to those outside the "early adopter" set.

To those for whom the ability to share video immediately is a real sticking point, the analysts recommend patience. IDC's Chute predicts that Flip will introduce wireless sharing by the Consumer Electronics Show next January. In the meantime, sharing on Flip is still relatively convenient, especially with its user-friendly software.

The analysts seem certain that the new iPhone won't challenge Flip's market position for the time being, but that doesn't mean the horizon is clear. Creative Strategies analyst Ben Bajarin thinks that video capture in phones could become a problem down the line. "How do they compete if this trend of higher resolution video capture and more shows up in more and more smartphones?"

Meanwhile both Rubin and Chute suggest that a video capture enabled iPod Touch or Nano could be a more dangerous to Flip than the iPhone. "They're adding functionality to a media player, and the devices are sold at similar places," explains Chute.

Flip's direct competitors pose the greatest risk, analysts say. Sony, Sanyo, Creative and Kodak have all launched products in the "Point and Shoot Flash" camcorder category. As Flip looks to expand its presence globally, it will face intense pressure from these contenders, many of whom already have brand equity in international markets.

IT on the iPhone: 'Use at your own cost and peril'

How AT&T gets stimulus funds