How to build great leaders

To help prepare promising leaders for the future, top companies are forcing their employees to take on new (global) risks. 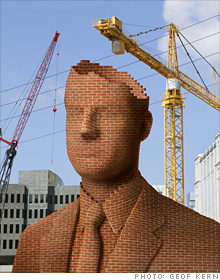 (Fortune magazine) -- For John Tolva, IBM's Chicago-based director of citizenship and technology, the value of his four-week assignment to Ghana last year really hit him during a game of Scrabble by candlelight.

He and teammates from India, Germany, Brazil, and other countries had agreed on an unorthodox rule: You could use any language you knew. "That's when I understood what a globally integrated enterprise looks like," he says.

He and the others were forced to ask "what connects us," since it obviously wasn't language or culture. The real connection, Tolva says, is "the values that IBM has instilled in us. It's a professional code that isn't written down -- but it's there."

The group of 10 was part of IBM's two-year-old Corporate Service Corps (CSC), which sends teams around the world to work with local organizations on local problems.

Tolva's group was helping create a program for promoting Ghanaian handicrafts globally. The job "stretched me in a way we all absolutely need," says Tolva, 37, who has since been promoted to his current executive-level job. "It gave us a shake in perspective." It also means that "there are now nine other people in the company I would trust with my life."

Developmental assignments like his are among the most important tools that great companies use to build leaders -- and that average companies rarely use at all.

The importance of such assignments and how they're being adapted to pay off in today's global economy are two of the strongest messages emerging from the research behind our new ranking of the world's Top Companies for Leaders.

Fortune has joined the human resources consulting firm Hewitt Associates and the HR services firm RBL Group to identify companies around the world that are best at attracting, developing, and keeping business leaders.

The making of Jeff Immelt

It's no coincidence that they turn out to be many of the world's top-performing companies. After years of repeating that "people are our most important asset," managers everywhere are discovering that in an information-based economy, it's actually true.

"Our board of directors spends an entire day on how we're developing our top leaders," says J. Randall MacDonald, HR chief at IBM (IBM, Fortune 500), No. 1 in this year's ranking. Despite working for the company most successful at leadership development -- and spending almost $700 million a year on it -- he knows the race never ends: "My lead over the competition is probably one-half of an inch."

There's no better time than a historic recession to push people outside their comfort zone, yet recessions are precisely when some companies cut back on this valuable tool.

Developmental assignments are an investment, so they incur costs before they pay a return. Pulling someone out of a job where he's performing well imposes a cost, and putting him into a job he hasn't yet learned imposes a further one. The payback -- a strong leader -- may not emerge for years.

Truly believing in these professional challenges requires more courage than you may suspect. Consider what happened at General Electric (GE, Fortune 500) back in 1989, when the company's appliance division discovered it had sold a million refrigerators with faulty compressors.

The refrigerators would have to be returned -- the largest appliance recall of all time. To manage such a crisis, most companies would turn to the most experienced "recall" executive on earth. GE did the opposite.

CEO Jack Welch and HR chief Bill Conaty decided to put a promising 33-year-old manager, future CEO Jeff Immelt, in charge of the situation, though he had zero experience with appliances -- or recalls. Welch and Conaty saw an opportunity to build a leader. And while the experience was hellish, Immelt says, "I wouldn't be CEO today if I hadn't had that job."

The best companies tailor these "stretch" assignments to the future business environment, which is why "global" development has become the major theme among virtually all the companies in this ranking.

Many of them -- including P&G (No. 2 on the list), GE (No. 7), Colgate-Palmolive (COLGATE-PALMOLIVE) (No. 12), and PepsiCo (PEP, Fortune 500) (No. 20) -- get most of their revenue from outside their home country. All realize that global expansion holds their greatest growth opportunities and often their greatest challenges. "International assignments are where we generate the most stretch," says Richard McAnally, an HR executive at Deere (No. 14).

How much stretch? Raj Kalathur is an Indian-born U.S. citizen working for Deere (DE, Fortune 500) in Singapore. It isn't easy. He's in charge of Deere's sales and marketing for most of Asia and Africa, where Deere is little known.

The company dominates the U.S. market for farm equipment with a 50% share, but Kalathur says 60% of potential customers in India -- the world's biggest tractor market -- have never even heard of it. Deere has been stretching Kalathur, 41, since he arrived for a summer job in 1996 while getting his MBA.

"In week one they sent me to Beijing to find out more about the banking industry in China and how we could get working capital financing," he says, still marveling at the experience. "I had no background in China or in banking." Later they put him in charge of logistics at a plant in Mexico -- "I had no background in logistics," he says, not to mention Mexico. Each challenge built him further.

"The next frontier in developmental assignments," says Hewitt principal Robert Gandossy, "is experiences that are more socially responsible." At Brazil's Natura Cosméticos (No. 11), managers might work in a nongovernment organization to help build and organize it. General Mills (No. 3) expects many of its most promising leaders to serve on nonprofit boards.

Modeled on the Peace Corps, IBM's Corporate Service Corps helps develop employee leadership skills, and it builds goodwill for the company in the developing world. It's also wildly popular. About 500 participate each year -- not many in a company of some 400,000 -- and they must submit a laborious application.

IBM says the program is more selective than any Ivy League college. Harvard Business School professor Chris Marquis surveyed participants and found that "virtually all respondents answered that the program increased their interest in staying at IBM."

That's vital because participants are mainly rising leaders who've been with the company seven to 15 years -- exactly the employees that a company is most vulnerable to losing.

Developing a broad program of stretch assignments isn't easy. Many corporate cultures are so addicted to the short term that they couldn't bear putting dollars into a new category of investment that will pay off only later.

But perspective is key. Most of Fortune's Top Companies for Leaders have been around a long time. Those that haven't been, such as Infosys (No. 24), show strong signs of lasting. They all understand that leadership development is a long-term game.

"We can't afford not to do this," says Deere's McAnally. "We're 172 years old. We're not just looking at the next year, but at the next several decades."

Leading during a downturn