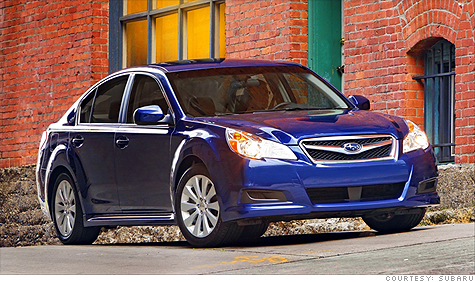 NEW YORK (CNNMoney.com) -- Subaru, the car brand of choice for quirky, all-wheel-drive loving Northeasterners and trendy turbo freaks, is on something of a tear.

Considering Subaru's record breaking sales at a time when others are struggling to unload cars, the number four Japanese brand in America is doing downright great.

Most of the credit goes to recent upgrades made to three of Subaru's five model lines. Those upgrades reflect a renewed focus on America.

Subaru's parent company, Fuji Heavy Industries of Japan, has mandated a tight focus on the needs of its single most important market, the United States. Executives in Japan instructed Subaru of America to pass along more customer feedback so Subaru designers and engineers could better hone in on what Americans want.

"When your chairman in Japan tells you to listen, you listen," said Subaru spokesman Michael McHale.

Subaru's Kabuki dance: But while they're changing their products to better suit the mainstream market, Subaru executives know they can't turn their backs on the customers who got them here, the ones who expect Subaru to be different.

The result is a balancing act. The products can go more mainstream, but shouldn't give up its left-of-center identity.

Besides winning its second Motor Trend SUV of the Year in a row and five Insurance Institute Top Safety Picks -- it won a corporate responsibility award from GLAAD, the Gay and Lesbian Alliance Against Defamation, an award that recognized Subaru's role as the first automaker in America to run ad campaigns specifically targeting gays. (Tagline: "It's not a choice, it's the way we're built.") Plus, Subaru's fall sales promotion involved, not rebates to customers or an offer to take the car back if you change your mind, but a donation to charity with each car purchased.

Product shift: While big surprises are coming from Subaru thanks to a new partnership with Toyota, for now, the main step of broadening its product appeal is a fairly simple one.

The Legacy mid-sized sedan and the Outback, the technically a SUV station wagon, are both a little larger than the versions they replace.

"The new Outback has 8 more cubic feet of passenger space in the rear seat, which was always a bit of a customer complaint," said Doll.

Up-sizing may seem an odd strategy in a market where all the buzz is around small cars. But Subaru is listening to the reality, not the buzz, said Jake Fisher, senior automotive engineer for Consumer Reports, which has given high marks to the recent Subaru models.

When it comes to performance, the newer Subarus are powerful but feel more languid and less responsive than earlier versions, said Fisher.

"When I first drove the new Legacy, I kind of missed the old one," said Fisher, "but I think a lot more people are going to like the new one."

The new Legacy now has a simpler, more elegant appearance, although it still retains a few of the extraneous bulges Subaru is known for. The new Forester has curving body lines and more a traditional crossover SUV look in place of the straight-edged, shoe box on its side look of its predecessor.

Next up for a makeover will be the Tribeca -- Subaru's big three-row crossover --said Jeff Schuster, an analyst with J.D. Power and Associates. Subaru has shown it's listening to customer demands, Schuster said. The new Tribeca will be a test of whether Subaru can keep it going.

As for those upcoming surprises, Toyota Motor Co. (TM) now owns 16.5% of Subaru and two carmakers are working jointly on some new products.

A sports car, which might be Subaru's first two-wheel-drive car since the 1990s, is expected in 2011. Subaru is also working on a new hybrid car using Toyota technology, which would Subaru's first hybrid.

The brand stretching won't go too far, though, Doll promises.

"We're still the smart boy in the class," he said.