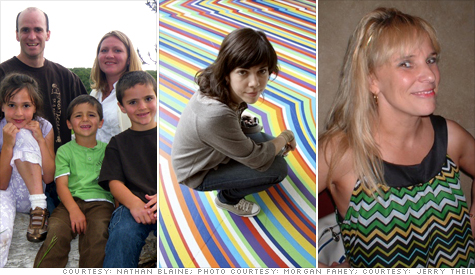 The Senate passed its version of health care reform on Thursday. Now it must be reconciled with the House version. Here is what 9 Americans hope will be fixed.December 24, 2009: 12:38 PM ET

The bill passed after months of heated partisan debate in a 60 to 39 party line vote. Every member of the Democratic caucus backed the measure; every Republican opposed it.

If enacted, the measure would constitute the biggest expansion of federal health care guarantees since the enactment of Medicare and Medicaid over four decades ago. It is expected to extend insurance coverage to over 30 million additional Americans.

"We are now finally poised to deliver on the promise of real, meaningful health-insurance reform that will bring additional security and stability to the American people," Obama said shortly after the vote.

"If passed, this will be the most important piece of social legislation since the Social Security Act passed in the 1930s."

The bill now must be merged with a $1 trillion plan approved by the House of Representatives in November. Democrats hope to have a bill ready for Obama's signature before the president's State of the Union address early next year.

Senate Republicans failed to stop the bill despite utilizing almost every weapon in their legislative arsenal. GOP leaders have repeatedly warned the measure will raise taxes while doing little to slow spiraling health costs.

Senate Majority Leader Harry Reid, D-Nevada, was forced to cut multiple deals in recent weeks to ensure the support of every member of his traditionally fractious caucus. Top Democrats needed the backing of all 60 members in three key procedural votes over the past four days to break a GOP filibuster.

Final passage of the measure, in contrast, only required a bare majority in the 100-member chamber.

An exhausted Senate planned to adjourn for the holidays shortly after passing the measure.

The health care debate is "about life and death in America," Reid said shortly before the vote. "It's a question of morality, of right and wrong. It's about human suffering. And given the chance to relieve this suffering, we must take this chance."

Reid ripped the Republicans for their unanimous opposition to the bill, saying he was "sorry to say that for the first time in American history, a political party has chosen to stand on the sidelines rather than participate in great -- and greatly needed -- social change."

Senate Minority Leader Mitch McConnell, R-Kentucky, argued it is "clear that even many of the people who support this bill with their votes don't like it." Otherwise, he claimed, "they wouldn't be rushing it through Congress on Christmas Eve."

"There is widespread opposition to this monstrosity," he warned. "This fight isn't over."

Republican Sen. Jim Bunning of Kentucky -- a staunch opponent of the bill -- was the lone senator to miss Thursday's vote.

Passage of the Senate health care bill, which is projected to cut the federal deficit by $132 billion over the next decade, signaled majority agreement in both chambers of Congress on a broad range of changes impacting every American's coverage.

Among other things, the House and Senate have agreed to subsidize insurance for a family of four making up to roughly $88,000 annually, or 400% of the federal poverty level.

They also have agreed to create health insurance exchanges designed to make it easier for small businesses, the self-employed and the unemployed to pool resources and purchase less expensive coverage. Both the House plan and the Senate bill would eventually limit total out-of-pocket expenses and prevent insurance companies from denying coverage for pre-existing conditions.

Insurers would also be barred from charging higher premiums based on a person's gender or medical history. However, both bills allow insurance companies to charge higher premiums for older customers.

Major differences between the more liberal House bill and the more conservative Senate bill will now be the focus of the conference committee that will try to merge them.

One of the biggest divides is over how to pay for the plans. The House package is financed through a combination of a tax surcharge on wealthy Americans and new Medicare spending reductions.

Specifically, individuals with annual incomes over $500,000 -- as well as families earning more than $1 million -- would face a 5.4% income tax surcharge.

The Senate bill also cuts Medicare by roughly $500 billion. But instead of an income tax surcharge on the wealthy, it would impose a 40% tax on insurance companies providing what are called "Cadillac" health plans valued at more than $8,500 for individuals and $23,000 for families.

Proponents of the tax on high-end plans argue it's one of the most effective ways to curb medical inflation. However, House Democrats oppose taxing such policies because it would hurt union members who traded higher salaries for more generous health benefits.

Asked in an NPR interview Wednesday if he prefers the income tax surcharge or the tax on high-end plans, Obama predicted the final bill will probably end up with "a little bit of both."

The Senate bill also would hike Medicare payroll taxes on families making over $250,000; the House bill does not.

Another key sticking point is the dispute over a public option. The House plan includes a public option; the more conservative Senate plan would instead create new non-profit private plans overseen by the federal government.

Given the reality of the 60-vote threshold in the Senate, however, there hasn't been much serious discussion among House leaders about pushing hard to keep the public option.

The Senate "tried to see if they had support for it. There isn't. That's the reality," a top House Democratic leadership aide told CNN. "I think a lot of people are coming to terms with that and I don't know how productive it would be to bring it out again."

Individuals under both plans would be required to purchase coverage, but the House bill includes more stringent penalties for most of those who fail to comply. The House bill would impose a fine of up to 2.5% of an individual's income. The Senate plan would require individuals to purchase health insurance coverage or face a fine of up to $750 or 2% of his or her income -- whichever is greater. Both versions include a hardship exemption for poorer Americans.

Employers face a much stricter mandate under the House legislation, which would require companies with a payroll of more than $500,000 to provide insurance or pay a penalty of up to 8% of their payroll.

The Senate bill would require companies with more than 50 employees to pay a fee of up to $750 per worker if any of its employees rely on government subsidies to purchase coverage.

Abortion also has been a sticking point for both chambers. A late compromise with Catholic and other conservatives in the House led to the adoption of an amendment banning most abortion coverage from the public option. It would also prohibit abortion coverage in private policies available in the exchange to people receiving federal subsidies.

Senate provisions, made more conservative than initially drafted in order to satisfy Nebraska Sen. Ben Nelson, would allow states to choose whether to ban abortion coverage in plans offered in the exchanges. Individuals purchasing plans through the exchanges would have to pay for abortion coverage out of their own funds.

Nelson said on CNN's "State of the Union" last Sunday that he would withdraw his support if the final bill gets changed too much from the Senate version.