NEW YORK (Fortune) -- Money is overrated: In fact, pay has little, if anything at all, to do with motivation in the workplace. That's the controversial argument put forth by best-selling author Daniel Pink in his new book, Drive: The Surprising Truth About What Motivates Us (Riverhead Books). "Pay for performance has to be exposed as folklore," he says.

Pink contends that, provided employees receive a baseline level of compensation, three other factors matter more than moola: a sense of autonomy, of mastery over one's labor, and of serving a purpose larger than oneself. 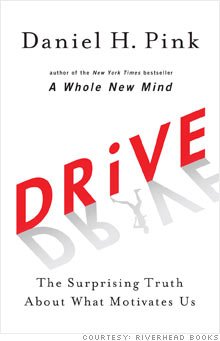 One case in point: the results-only work environment at Best Buy's Richfield, Minn., corporate offices. Beginning in 2008, salaried workers there were allowed to shape their work day, putting in only as many hours as they felt necessary to get their jobs done. Productivity increased by 35% and turnover fell sharply, according to The Harvard Business Review.

Hmmm. There may be something in all this -- but the executives at Goldman Sachs (GS, Fortune 500) aren't exactly busting a gut to adjust. Like others on Wall Street, the banking giant, which is expected to earn $6 per share in the fourth quarter, argues that fat bonuses are crucial to making its numbers.

Responds Pink, in a now common refrain: That's precisely the attitude that led to the recent financial meltdown, as traders and mortgage brokers focused on short-term rewards that encouraged "cheating, shortcuts, and unethical behavior."

In one 2005 experiment he describes, economists working for the Federal Reserve Bank of Boston tested the power of incentives by offering monetary rewards to those who did well in games that included recalling a string of numbers and tossing tennis balls at a target. The researchers' finding: Over and over, higher incentives led to worse performance -- and those given the highest incentives fared worst of all.

From this and other cases, Pink deduces that monetary inducements remove the element of play and creativity, transforming "an interesting task into a drudge." It's even possible, he elaborates, for outsized rewards to have dangerous side effects, like those of a drug dependency in which a recipient requires ever larger doses. He cites neuroscientific testing that shows the promise of cash rewards activates a chemical surge in the brain similar to that brought on by cocaine or nicotine.

Pink says his approach isn't just for knowledge workers -- it can motivate even those doing less creative work. He points to Zappos, where call-center employees are not given scripts and are instead instructed to handle relations with customers in whatever way they think best. Turnover, ordinarily high at call centers, is minimal at Zappos.

Pink is aware that his company examples -- no GE, no IBM, no Microsoft -- hardly represent the commanding heights of the economy. But he thinks his approach will catch on, even in the biggest outfits. "Executives tend to be pragmatic, and in time they will respond," he says.

A Daniel Pink toolkit for amping up motivation
Board pay: Unchecked and out of hand