NEW YORK (CNNMoney.com) -- A counterfeit version of the over-the-counter weight-loss product Alli being marketed online could be harmful to dieters, the U.S. Food and Drug Administration warned Monday.

The FDA said the counterfeit Alli was sold in 60 mg capsules as part of a 120 count refill kit. 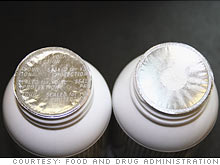 The counterfeit version of Alli does not have the words "sealed for your protection" printed on the bottle's protective seal.

Sibutramine should not be used by certain patients or without physician oversight and can interact in a harmful way with other medications, the FDA said.

The FDA and GSK said there are a number of ways for consumers to identify the false version of Alli, including the following:

-- The counterfeit version is missing the "LOT code" on the top of the outer cardboard packaging.

-- The seal on the bottle should read "SEALED FOR YOUR PROTECTION" in white ink on the bottle. This statement is not present on the fake product.

Consumers who suspect they have purchased counterfeit Alli are urged to contact the FDA at http://www.accessdata.fda.gov/scripts/email/oc/oci/contact.cfm.