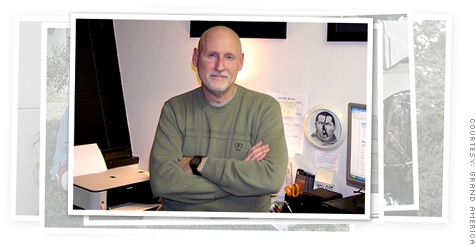 NEW YORK (CNNMoney.com) -- When President Obama called last month for a new tax break to spur job creation, critics blasted him for offering no specifics. On Friday, Obama filled in the details: He wants to give businesses a $5,000 tax credit for each net new employee they hire this year.

Job creation "must be our No. 1 focus in 2010," Obama said Wednesday night in his State of the Union address. "We should start where most new jobs do -- in small businesses."

Obama traveled Friday to Baltimore, where the local unemployment rate is nearly 11%, to unveil his tax-cut road map. He got a tour of the Chesapeake Machine Company, a local manufacturing and repair company that has been around since 1981.

Earlier Friday morning, a government report showed that the U.S. economy grew at the fastest pace in more than six years during the last quarter of 2009: GDP rose at a 5.7% annual rate. But even as the economy is rebounding, unemployment hangs in the double digits.

"The good news is, today's report means that we're increasing GDP -- we're increasing economic growth," said Obama from Baltimore. "That means businesses are going to start to see more customers, and hopefully even here at Chesapeake you might start seeing enough orders that you start needing to hire that extra shift. That could make a big difference."

The $5,000 per-worker tax credit he called for would be available to businesses of any size, and would be retroactive to the start of the year. Startups launched in 2010 would be eligible for half of the tax credit.

Obama also proposed a reimbursement of the Social Security taxes businesses pay on increases in their payrolls this year. Firms could earn the credit by raising wages or increasing the hours of their current workers, as well as by hiring new employees. The tax credit would be adjusted for inflation, and would not apply to wage increases above the current taxable maximum of $106,800.

The proposal would cost $33 billion, according to estimates released by the White House, which expects 1 million businesses to benefit from it.

Americans are impatient for economic growth to translate into jobs.

While any business would be eligible for the tax breaks, the refund would be capped at a total of $500,000 per firm, a move the White House hopes will steer the biggest benefits to the smallest companies. Firms eager for cash could claim the credits on a quarterly basis, sparing them the wait before they file their annual taxes.

Hiring tax credits have been proposed before, and shot down in part because of their vulnerability to abuse. Senior White House officials say Obama's plan includes a slew of safeguards to prevent companies from gaming the system.

For example, companies would have to show net increases in their staffing and payroll to qualify. Businesses that cut 20 workers and hire five wouldn't be eligible, nor would those that lay off a $50,000 worker and hire two $20,000 staffers.

Main Street's cash crunch: Several in Congress are already on board with the idea of tax credits for hiring. Senators Charles Schumer, D-N.Y., and Orrin Hatch, R-Utah, unveiled their plan, which has some similarities to Obama's, in an op-ed on Wednesday.

But some business owners say the idea puts the cart before the horse.

"I need money before I hire people, not after I hire them," said Jimmie Hughes, the owner of Grand America in Richardson, Texas. Hughes' 15-person company sells supplies for a range of businesses, including funeral homes and police departments.

The company's sales are growing, and Hughes would like to hire more people. But while his receivables ledger is at a record high, his cash flow is suffering. Hit by the recession, his customers are taking longer than ever to pay their bills. Hughes, who started the company at home as a sole proprietor in 2003, has maxed out half a dozen credit cards trying to keep pace with the growth.

"It all comes down to cash -- how much cash do I have to apply to what I owe my vendors?" Hughes said. His staffing decisions will be based on "my cash-flow situation, not a tax credit."

Jeff Moss, the owner of Pancho's Border Grill in Great Neck on Long Island, N.Y., had a similar reaction.

What Moss really needs is for the economy to pick up so his customers will increase their discretionary spending. Two weeks ago, he shut down his second restaurant in another, less affluent area of Long Island.

"When the economy tanked, traffic dropped," Moss said. "That was 30 people who lost their jobs, and that was a bitter pill to swallow."

Main Street view: 'Everything is going to banks'