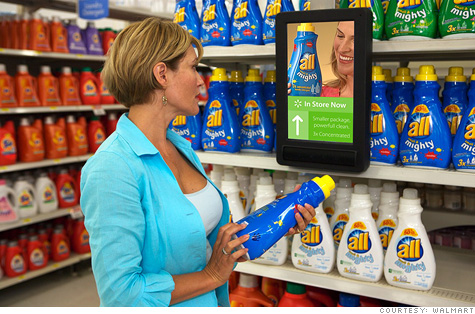 As retailers adjust to tight-fisted shoppers, many stores are shrinking the number of name-brand products -- including detergents -- on their shelves.By Parija Kavilanz, senior writerFebruary 16, 2010: 1:26 PM ET

NEW YORK (CNNMoney.com) -- Don't be shocked if you can't find your favorite salad dressing or mouthwash on your next trip to Wal-Mart.

Large retailers -- including Wal-Mart (WMT, Fortune 500), the world's biggest -- are wrestling with having too many types of brand-name products. At the same time, shoppers are buying less and looking for bargains.

So unless a particular brand is a top seller in its category, it's getting knocked off the shelf -- and sometimes getting replaced by a cheaper store brand.

For example, Wal-Mart recently removed Glad and Hefty-branded storage bags from shelves, replacing them with its own lower-priced Great Value brand, according to the parent companies of both products.

In the case of Hefty, parent Pactiv Corp. (PTV) told CNNMoney.com that Wal-Mart reversed its decision, and will return its products to shelves this spring -- after Pactiv agreed to make the Great Value bags that will sell alongside the competing Hefty product.

"Hefty was off Wal-Mart's shelves, but we are being brought back," said Matt Gonring, spokesman for Pactiv Corp.

Bill Pecoriello, CEO of market research firm ConsumerEdge Research, expects Wal-Mart and other sellers will trim several name-brands across categories in coming months, or negotiate deals to get better pricing.

According to Pecoriello, those categories at greatest risk of losing brands are everyday-type purchases such as household products, toiletries and food staples.

These are also categories in which retailers have aggressively pushed their own house brands.

"If you consider the economics of this, if Wal-Mart can build customer loyalty for its own brand, which is also cheaper-priced and cheaper to stock than name-brands, then it will," he said.

Moves such as this are significant given Wal-Mart's heavyweight status in the retail industry.

"Any change that Wal-Mart makes with its product assortment has enormous implications for the entire industry," said Ali Dibadj, senior analyst with Sanford C. Bernstein & Co.

Wal-Mart is not the only one doing this, according to Dibadj. He says leading drug store chains, including CVS and Walgreens, grocers such as Kroger (KR, Fortune 500), and Wal-Mart's rival discounter, Target (TGT, Fortune 500), are also looking to simplify their store shelves.

In good economic times, product variety is a must for retailers. But in down times, when shoppers aren't buying much, variety can be a burden.

"Wal-Mart's a little fed up," said Lora Cecera, retail expert and partner at strategy consulting firm Altimeter Group. "I think the feeling is that as these companies keep extending their [product] lines, it's only causing confusion for shoppers and not really driving them to buy more products."

As a consumer, she asked, "Do I really need to decide between 15 different types of toothpaste when I go to a store?"

"On an industry level, we've been talking about simplifying product assortment for a long time," said Willoughby. "If you walk into a Wal-Mart or another large retail chain, there are so many products on shelves that it does make it harder to shop."

Besides cutting clutter, industry experts say Wal-Mart and other retailers are looking for more lucrative deals from suppliers on both prices and advertising.

In one recent example, according to published reports, Wal-Mart removed Arm & Hammer liquid laundry detergent from most of its stores. But the discounter brought back the product after Arm & Hammer boosted its advertising for the product at Wal-Mart.

Said Dibadj, "Perhaps one consideration in which product to cut is based on which company gives [Wal-Mart] the best deal."

Citing the Hefty example, he said "these threats can become quite aggressive, such as delisting and subsequent relisting after a compromise.

"In this recession, consumers have certainly become less discriminating with what they buy," said Cecera. "Consumers have rushed to value prices, and they are buying generic brands."

She said retailers' own brands have grown their market share by between 2% to 6%.

This newfound affection for store brands is "sticking," said Dibadj. He cites his firm's recent survey finding that 77% of consumers who traded down to less expensive private label products are happy with their decision.

Talkback: Are you about to become ineligible for federal unemployment benefits? What will you do if Congress doesn't extend the deadline to apply for additional benefits? E-mail realstories@cnnmoney.com and you could be part of an upcoming story.

Zhu Zhu pets: The next generation