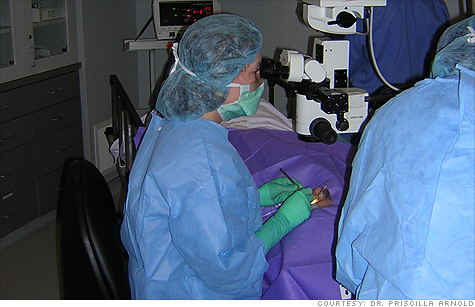 NEW YORK (CNNMoney.com) -- With a 21% cut to Medicare reimbursement rates set to take effect Monday, the nation's largest physician organization has informed its members about their options -- which include shutting off practices to new Medicare patients.

"To our physicians, we are providing information on their Medicare participation options, including how to remove themselves from the Medicare program," said James Rohack, president of the American Medical Association, whose more than 250,000 members include doctors, medical students and faculty members.

Some 43 million Americans receive Medicare coverage. For doctors who accept Medicare, federal law requires that reimbursement rates be adjusted annually based on formula tied to the health of the economy.

That law says rates should be cut every year to keep Medicare financially sound. But Congress has blocked those cuts from happening in seven of the last eight years and could still do so this year.

He said the AMA wants the current law to be repealed and a new formula used "that more accurately reflects the cost of providing care" in determining Medicare reimbursement rates.

In the meantime, physicians are asking the AMA to prepare handouts they can give patients to prepare them for the worst-case scenario: getting dropped completely. And a new report on the AMA's Web site tells doctors how they can help their patients find other doctors if they decide to no longer accept Medicare.

"All this is a result of physicians becoming very frustrated with the situation," said Rohack. "It's regrettable, but it reflects the current political environment. Congress need a crisis before it acts."

Kornel, who's been in practice for 27 years, said he had always accepted Medicare patients in the past.

"But when I looked at my income from reimbursements, I was losing money every time I took care of a Medicare patient," said Kornel. "It wasn't covering my costs."

While Medicare patients accounted for about 20% of his total patient load, they were generating less than 5% of his income.

"I would have had to do 300 operations in one year just to break even," he said.

Still, he said he doesn't want to turn away anyone who wants him as their doctor. "If they really can't pay the fees then I will do it pro bono," said Kornel.

The American Association of Neurological Surgeons, to which Kornel belongs, has warned that Medicare patients would likely get less access to doctors if Medicare payment cuts continue.

"These results paint a bleak path we are going down," said Dr. Troy Tippett, president of the association.

However, the federal government's Center for Medicare and Medicaid Services said that its own data, and other industry reports, show that only a small percentage of beneficiaries unable to get physician access.

The agency maintains that 96.5% of all practicing physicians, nearly 600,000 doctors, currently participate in Medicare.

Dr. Priscilla Arnold, an ophthalmologist based in Bettendorf, Iowa, and past president of the American Society of Cataract and Refractive Surgery, isn't buying those numbers.

"You have to assume that CMS' data reflects physicians that are accepting Medicare patients but [do] not account separately for those who are reducing the number of Medicare patients," said Arnold, who added that a majority of her patients are on Medicare.

She said she has to "realistically evaluate" every year if she can continue to see all her patients.

If this latest cut goes into effect, Arnold said many doctors in her specialty won't be able to sustain their practices. "This year, the situation is more crucial than ever," she said.

Kornel said consumers should prepare for some difficult days ahead.

"If doctors drop Medicare patients, these people will be forced to go to clinics where it's hard to get appointments, the waits are long and you get far less attention than you would otherwise get," said Kornel. "I think this situation is headed for disaster."

How Obama wants to pay for health reform