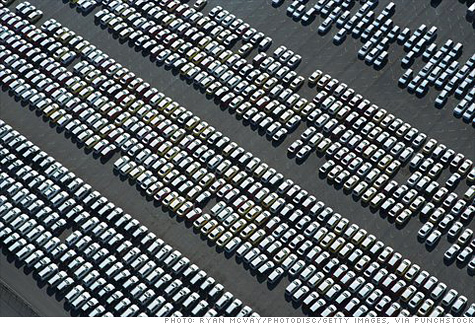 NEW YORK (Fortune) -- The tabulation of U.S. auto sales for the month of February contains some big surprises. Consider:

Ford outsold General Motors for the first time in 12 years.

Despite all its well-publicized troubles, Toyota sales only declined by 8.7%.

And some less heralded brands -- Volkswagen and Subaru -- recorded sales increases of a third and more.

Analyzing auto sales is notoriously tricky business. One-month results can easily be skewed by low inventories, high incentives, or an abnormal bulge in fleet sales. Just to add some spice to the mix, automakers have been known to fudge the results, counting as sold cars that have barely touched ground at a dealer's lot or, at times, holding back sales in a good month to boost results in the following month.

The most important message from February's results is that the selling of cars is still a contact sport. Stung by its fall from first place, GM already has reorganized its sales and marketing organization. It demoted some players and promoted others, to put more authority in the hands of the new North American boss Mark Reuss. Listening to Reuss' conference call announcing the moves, it was clear that he is already impatient to get sales moving. CEO Ed Whitacre now knows exactly who to call when he wants better results.

Meanwhile, anybody who thought Toyota (TM) was going to sit back and wait for the sales impact from those congressional hearings on unintended acceleration was badly mistaken. Of all the Japanese automakers, Toyota has the most aggressive marketing operation and the deepest financial pockets. Its dealers are just finishing up a company-ordered upgrade of their stores and are anxious to get a return on their investment.

So when Toyota cranked up its incentive spending by more than a quarter, it registered on the sales floor. Even so, Toyota got off cheaply. Its average incentive of $1,833 per car is still only a bit more than half of the $3,300 that Ford (F, Fortune 500) spent, according to Automotive News.

Now Toyota is upping the ante again. Early in March, it said it is offering 0% financing for 60 months, a free two-year maintenance plan, and other incentives. And it will start broadcasting new commercials designed to make customers feel more comfortable buying its cars.

GM responded within hours, announcing its own 0%, 60-month financing program on 2010 products. With customer loyalty a thing of the past, automakers too often find themselves selling the deal instead of the car.

Ford didn't immediately follow suit, though it vowed to remain competitive with the others. The Dearborn automaker was looking unusually strong in February. Besides its perennial best-seller, the F-series pickup truck, its Fusion sedan was the industry's seventh strongest performer, and the Escape crossover was ninth.

Ford has an unusually robust product pipeline, according to research by Bank of America Merrill Lynch -- second only to Hyundai/Kia, as measured by the percent of volume it is replacing. Since customers like new models, that bodes well for the future.

February results also spotlighted two smaller automakers that are clearly on the ascendancy. After years of neglect, Volkswagen is finally making a concerted effort to sell cars in North America, and customers are responding to the opportunity to buy a German nameplate for less-than-luxury-car prices.

Subaru, meanwhile, has some fresh new models in the Outback and Legacy, attractive mainstream designs, and the added feature of all wheel drive across its model line.

What all this churning in the marketplace means for the rest of the year is hard to say. Ford may be coasting right now, but it will have to remain responsive to the two battleships maneuvering beneath it.

Driven by CEO Whitacre, GM is clearly operating under a mandate to boost unit sales and revenue. Nearly a third of its February sales were made to fleets, with fleet sales expected to rise for the next several months.

For its part, Toyota has made clear that it will compensate for any slackening in consumer confidence by sweetening up its deals. "The promotion for March is unprecedented in the history of Toyota," said division general manager Bob Carter.