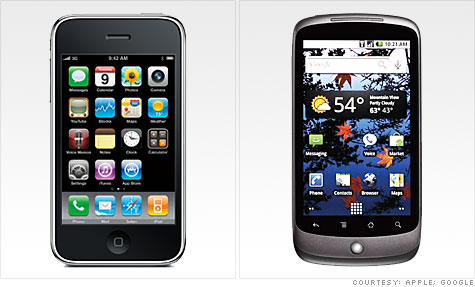 In the blue corner, wearing black, weighing in at 4.8 ounces, the 31-month champion of the touch screen phones: Apple's iPhone!

In the red corner is the challenger, appearing on every carrier, a new entrant to the heavy-weight battle: Google's Android!

It doesn't take Michael Buffer's "let's get ready to rumble" introduction to know that Apple and Google are squaring off for what looks to be an epic battle of the smartphone platforms. Apple made that loud and clear on Tuesday when it announced it would sue HTC, the maker of the Nexus One "Google phone," over 20 alleged patent violations.

Experts say Apple is an aging champion that is feeling threatened by the momentum surrounding new-to-the-game Google's Android platform.

"Apple set the bar and now it's being toppled," said Will Stofega, program director of mobile device technology and trends at IDC. "Apple is playing defense, and Google is playing offense."

Although it may seem that Google (GOOG, Fortune 500) and Apple (AAPL, Fortune 500) are the only contenders battling it out in the U.S. smartphone market, that's simply not true. In fact, neither is even the largest.

That "biggest" award goes to BlackBerry maker Research In Motion (RIMM), which commands 41.6% of the market, according to technology data tracker comScore. Apple's iPhone OS is is second place with 25.3%, and phones that run Google's Android operating system are in fifth with 5.2% of the market.

Battle for the data belt

But there is an all-important metric that sets Android and iPhone OS apart from the competition: data. Heaps and heaps of data.

That's important for consumers, because it means they're getting more functionality out of iPhones and Android-based phones, which is, after all, the point of getting a smartphone. Those phones give users a seamless, computer-like browsing experience, and they offer by far the most apps.

The iPhone App Store has more than 100,000 apps. Google's Android Market has 20,000. The next biggest competitor is RIM with several thousand and Palm's (PALM) WebOS just crossed the 1,000-app threshold.

"People are more engaged with their iPhones and Android phones due to the browsing experience," said Soumen Ganguly, principal at tech consultancy Altman Vilandrie & Co. "That's where BlackBerry generally lags by quite a bit."

Data usage also gives Google and Apple an edge over the competition, because more data usage means more revenue. Apple takes a 30% cut from the apps that it sells, and Google makes money when people search on Google or visit Web sites that feature ads supported by Google.

It may be too soon to count out any of the smartphone players just yet, given how quickly new technologies develop. RIM recently said that it planned to improve its browser functionality and Microsoft (MSFT, Fortune 500) wowed spectators with its Windows Phone 7, which is set to be unveiled this fall.

But some say it's Android and iPhone OS, more than any other smartphone platform, that are making the greatest strides in the race to be market leader.

"Looking to the future, it is primarily between Google and Apple to shape the future of the mobile industry," said Jagdish Rebello, principal analyst of communication systems at iSuppli Corp. "When you look at what Google and Apple are doing with applications and creating an ecosystem ... others are just playing catch-up."

Google and Apple have taken very different approaches to the battle. Here's a look at how that bout is playing out:

Apps: Apple is winning the app war now, with about five times more apps than Google. But app developers have to get their products cleared by Apple's standards police (remember the 6,000 sexy apps that got purged last week?) before they can appear in the App store. That's a process that can take months.

Google has taken the opposite approach, opening its platform to developers. IDC's Stofega says that developers are embracing Google's approach, and as Android adoption grows, more developers are writing Android apps. That could bring some of the higher-quality apps to Google's side. Google has a lot of ground to cover, but app war may just be beginning.

Devices and prices: IPhone OS runs on three devices: the iPhone 3G S, the iPhone 3G and the iPod Touch, with prices ranging from $99 to $299 with a new contract.

Android is currently available thorugh three carriers on on 10 smartphones in the U.S., with prices ranging between $79 to $199 with a new contract. It also runs on a number of other devices, including several netbooks and the Barnes & Noble Nook e-reader.

"Apple has a confrontational 'our way or the highway' strategy, but it's the Google model that's winning over carriers," he said.

Availability: The iPhone is available exclusively on AT&T (T, Fortune 500) in the United States, and there have been well-documented problems with how that partnership has negatively impacted many customers' experiences.

"Google's strategy isn't about keeping one carrier happy but about enabling mobility, hardware and software to a variety of different tiers," said Stofega. "There are advantages to serving a number of different masters, and that's where Apple has some problems."