(Fortune) -- Experts have long counseled against using financial planners who charge commissions, given their incentive to simply sell products that pad their paychecks.

Now a new working paper concludes there is another risk -- one that afflicts advisers of all stripes. 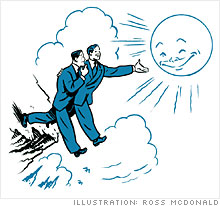 The problem: Financial planners are yes-men and -women, asserts a report co-authored by Sendhil Mullainathan, a Harvard professor and top behavioral economist.

Most planners, his report finds, reinforce our bad investment behaviors instead of fixing them. And the problem, he says, may be harder to solve than the fee issue.

Mullainathan, a MacArthur "genius" grant recipient, and his co-authors hired actors and had them visit planners in the Boston area on nearly 300 occasions in 2008, pretending to seek financial advice.

The actors were armed with one of four distinct fake portfolios: One group was heavily invested in index funds; another entirely in cash; a third claimed to be seeking the next hot market sector; and the fourth said they held 30% of their savings in their employer's stock.

The result was nearly always the same: The actors walked out with advice that mimicked the biases in the original portfolios. Investors who wanted to find the next hot sectors, for example, were put in actively managed funds that try to beat the market. The cash-sitters were more likely to be told to take the cautious step of buying index funds.

The most telling result came from the actors loaded with company stock. Just 40% of the planners told them to sell the stock and diversify their portfolio, even though the move would both be in the client's best interest (for why, look at what happened to the employees at Enron) and generate commissions for the planner.

"There is a need to get business in the door and have that client come back year after year," says Mullainathan. "So they will avoid the difficult conversations."

The study mostly examined commission-based planners, and the mystery shoppers had modest portfolios of between $50,000 and $100,000. But there's no reason to think the desire to placate a client would diminish with a larger portfolio.

Dealing with opinionated potential clients is tough, says Richard Salmen, a fee-only financial planner in Overland Park, Kans., and chairman of the Financial Planning Association. He has clients who have held a large portion of their portfolio in company stock and been unwilling to sell. Over time, he says, most diversify.

"People don't make financial decisions with logic all the time," says Salmen. "There's a lot of emotion, and you have to gain their trust."

So how do you know when you're getting good advice from a planner, and not just what he thinks you want to hear? It depends on what you are asking, Mullainathan says. His study did find that advisers do a good job of matching clients to asset classes -- stocks or bonds -- that fit their risk profiles.

Finally, the yes-man problem can't just be pinned on advisers. A 2007 survey from the Employee Benefit Research Institute found that two-thirds of the people interested in meeting with a financial planner were likely to implement advice only if it conformed to their own ideas.

So if you want to improve the input you get, perhaps the first step is to look for someone who challenges your ideas, rather than echoing them.